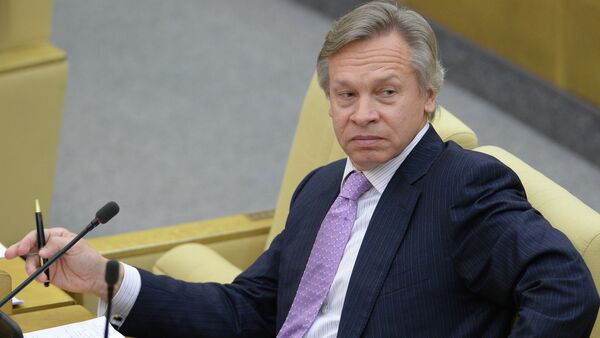 “As we remember some time ago when the process only began with Russia’s active support there was no lack of skeptical assessments of its prospects. Most skepticism came from the West,” Alexei Pushkov said.

“They tried to convince us that only Western countries can integrate economically, and not post-Soviet states, that they are only destined to become satellites of Western integration groups,” he said.

The deal not only confirmed the success of the integration processes between Russia, Kazakhstan and Belarus, but also refutes “calculations by foreign power centers for the economic and political subordination of these states,” Pushkov said.

Pushkov said it is highly likely that other countries will join the Eurasian Economic Union in the future.

“I believe there is no need to hurry up. This accession should ripen. It took the integration processes in Europe over 40 years to form the modern European Union,” he said.

Russian President Vladimir Putin and leaders of Belarus and Kazakhstan signed the treaty on the formation of the Eurasian Union in Astana earlier on Thursday. The treaty will enter into force on January 1, 2015.