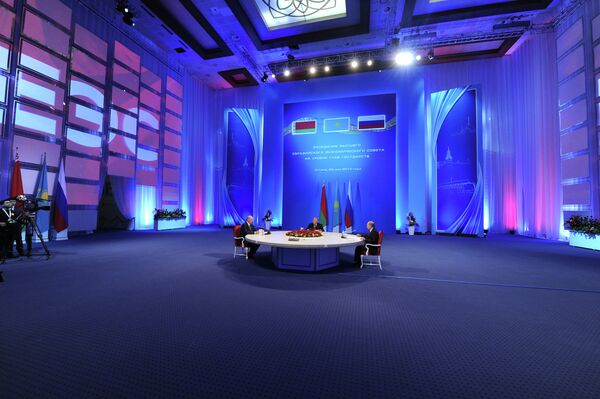 © RIA Novosti . Michael Klimentyev
/
Go to the photo bank
Subscribe
The nascent Eurasian Economic Union (EAU) will soon become an economic power that the West will have to reckon with, and its creation was a logical response to attempts by Western partners to establish unfavorable rules of the game, Russian lawmaker Anton Zharkov said Thursday.

MOSCOW, May 29 (RIA Novosti) – The nascent Eurasian Economic Union (EAU) will soon become an economic power that the West will have to reckon with, and its creation was a logical response to attempts by Western partners to establish unfavorable rules of the game, Russian lawmaker Anton Zharkov said Thursday.

“The EAU will soon become a power that the West will have to reckon with, the Union has the potential, it is also oriented not only to the cooperation within its members, but also to the expansion of ties with the Asia-Pacific partners,” said Zharkov, a member of the Russian State Duma.

The creation of the block has propelled its member states to a higher level of integration. The signatories have made commitments to ensure coordinated policy in key economic sectors, including energy, industry, agriculture, transportation.

According to the lawmaker, the creation of such an economic structure, which will be open for the accession of new members, is not only a logical development of economic relations within the former Soviet republics, but also a response to the West’s attempts to thrust unfavorable rules of the game on its partners.

On Thursday, Russia, Kazakhstan and Belarus signed an agreement on the creation of the Eurasian Economic Union, which is to enter force next January.

The deal stipulates integration and free trade between its three member states. More countries are expected to join the block as well.

Earlier in the day, Kyrgyz President Almazbek Atambayev announced his country was planning to join the union by the end of the year.

The leader already met with Russian President Vladimir Putin to discuss a roadmap for the accession, with Putin saying Russia was ready to assist the country in the process.

Armenian President Serzh Sargsyan also said Armenia was set to join the EAU Treaty by June 15. The Russian President hailed the initiative, saying the deal should be signed as soon as possible.