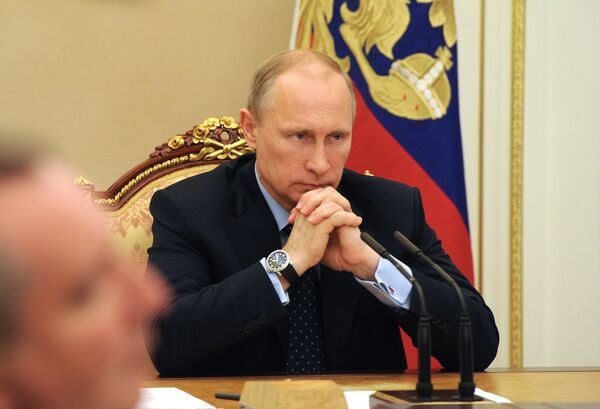 “If the conditions, which you are currently agreeing with the partners, will be fulfilled, if payments of agreed sums begin, then the Russian government should make its mind on what it is ready to offer in further gas cooperation with partners in Ukraine,” Putin said at a meeting with government officials.

He said that Russia’s approach to gas cooperation with its neighbor was based not only on partnership, but also on friendship, but warned that Moscow may review its approach.

“I hope that there will be no situation in which we will be forced to introduce pre-payment [for Ukraine],” the Russian leader said.

He described attempts to question the bilateral 2009 gas contracts as “absurd,” since they were signed “by the same people who are still in power” in Ukraine.

Earlier in the day, EU Energy Commissioner Günther Oettinger announced that Ukraine’s gas debt to Russia had surged from $3.5 to $4 billion.

Moscow says that it has not recently received a single payment from Kiev and claims it is ready to cut off gas supplies to Ukraine unless it pays off part of its debt by June 3.

Kiev meanwhile insists it is ready to pay off its debts on the condition that Russia agrees to the old price of $268.50 per thousand cubic meters of gas, which was raised to $485 in April following the annulment of two previous discounts.

Russian Energy Minister Alexander Novak announced earlier this week that there was no possibility of changing the price agreed under the 2009 deal between Russian gas giant Gazprom and Ukraine’s Naftogaz, though a discount could be considered.