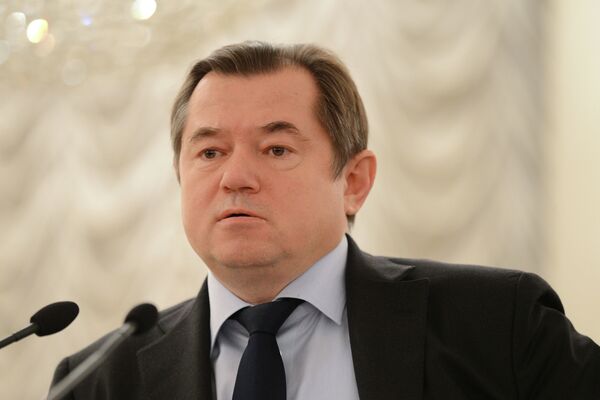 © RIA Novosti . Vladimir Astapkovich
/
Go to the mediabank
Subscribe
International
India
Africa
By imposing possible economic sanctions against Russia, the European Union will hurt its own importers, while Russia will only benefit from the restrictions which will stop capital outflow, reorganize its financial system and stimulate import-substituting production, Russian presidential aide Sergei Glazyev told RIA Novosti.

MOSCOW, May 28 (RIA Novosti) – By imposing possible economic sanctions against Russia, the European Union will hurt its own importers, while Russia will only benefit from the restrictions which will stop capital outflow, reorganize its financial system and stimulate import-substituting production, Russian presidential aide Sergei Glazyev told RIA Novosti.

“The attempts to limit Russian trade will in the first place hit the importers of Russian products, i.e. European Union. According to our estimates, imposing the full-scale economic sanctions, as it was done in case with Iran, will cause Europe damage of around one trillion euro [$1.36 trillion], with Germany and Baltic countries suffering the most,” Glazyev said in an exclusive interview.

On Wednesday, the leaders of EU member countries agreed to continue working on new sanctions against Russia during a summit in Brussels. Glazyev believes the US is pushing European countries into the confrontation with Moscow in order to press Russia on the international gas market.

“American aggression is aimed not at establishing democratic values in Ukraine by means of bombardments but to create a chaos in the center of Europe … to weaken Russia’s and the EU’s positions and to force the EU to sign an unprofitable deal on the free-trade zone with the United States and to replace part of the Russian gas by their own,” Glazyev noted.

The official, however, sees benefits from the potential sanctions for the Russian economy.

“Russia is a donor of the world’s economy. Around $100 billion annually flows from our financial system into the international financial system. If the sanctions are imposed, less money will flow from Russia, that is all,” Glazyev said, adding that attempts to freeze Russian assets abroad will stimulate local businessman to keep money inside the country.

Russia has faced major capital outflow since the beginning of the year, when tensions between Moscow and the West rose over the Ukrainian crisis. Nearly $50 billion left the country in the first quarter, which spurred the Russian Central Bank to revise its 2014 outflow forecast that now amounts to $90 billion.

Glazyev underlined that financial sanctions could also have a positive effect on the Russian economy in terms of developing internal credit sources.

“Financial sanctions are most likely to have a recreational effect rather than a negative one … It is possible of course that there will be sanctions against trade but then again Russia has a positive trade balance,” he said.

According to the presidential aide, the sanctions will create additional motivation for import substitution industries, especially in strategically important areas, which is essential for national security and the modernization of the Russian economy.

“The threat of sanctions forces us to pull ourselves together and to more actively augment our scientific and technological potential, using it to the fullest to provide all technological chains necessary for the country’s security,” Glazyev added.

Russian President Vladimir Putin said last week that Russia is about to undergo a technical revolution, while the amount of non-energy exports should increase by six percent annually.

The US and EU have already imposed two packages of targeted sanctions against dozens of Russian officials and companies in response to the country’s reunification with Crimea and Moscow’s stand on the current situation in Ukraine. The Russian Foreign Ministry has repeatedly stated that the language of sanctions is counterproductive and could have a boomerang effect on European economies.