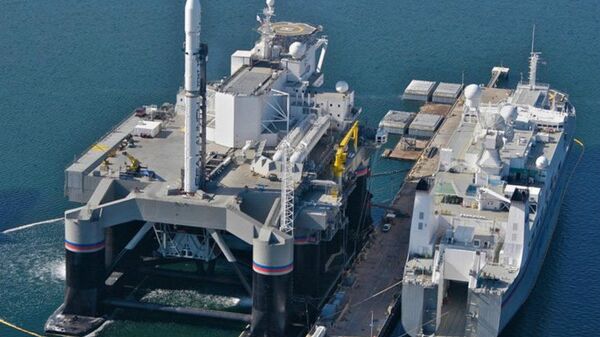 “The Eutelsat-3B spacecraft has separated from the booster. The satellite has been placed under the management of the launch sponsor, the Eutelsat communications operator,” a Roscosmos spokesman told RIA Novosti.

The first commercial satellite to be equipped with Ku, C and Ka band transmitters in a single platform, Eutelsat-3B will operate up to 51 transponders. Eutelsat 3B's 15-year mission will serve markets in Europe, Africa, the Middle East, Central Asia and South Africa, including Brazil. Built for operator Eutelsat by Europe’s Astrium on the Eurostar E3000 platform, the satellite weighs around 6 tons.

The May 27 launch was the first this year for Sea Launch and the 36th in the program overall. The previous launch of Zenit-3SL rocket carrying an Intelsat-27 telecommunications satellite ended in failure on February 1, 2013, as the satellite crashed shortly after lift-off. The failure was later tracked down to a defect in a hydraulic oil pump.

Sea Launch was formed in 1995 as a consortium of four companies from Norway, Russia, Ukraine and the United States, managed by US aerospace giant Boeing.

The project makes use of a floating launch platform to place rockets on the equator – the best possible location for launches to geostationary orbit – giving the rocket additional speed on lift-off thanks to the Earth’s rotation.

Sea Launch resumed operations in 2011 after a 30-month hiatus while going through US Chapter 11 bankruptcy, a change in ownership from Boeing to Russia’s Energia, and a move of the company headquarters from California to Switzerland.

Sea Launch earlier said that the joint Russia-US space launches would not be affected by the latest round of US sanctions against Russia. Company spokesman Peter Stier told RIA Novosti in late April that although some joint operations with Russia might be in question, the Eutelsat-3B launch schedule would not be impacted as a result of the latest round of US sanctions.

US space agency NASA announced in early April that amid tensions over Ukraine it would halt cooperation with Russia, but will continue working together on the International Space Station and participate in joint meetings at international events in third countries.

Shortly thereafter Deputy Prime Minister Dmitry Rogozin suggested on Twitter that the US should “send its astronauts to the ISS by the trampoline.” Earlier this month, Rogozin announced plans to end Russian participation in the International Space Station after 2020.