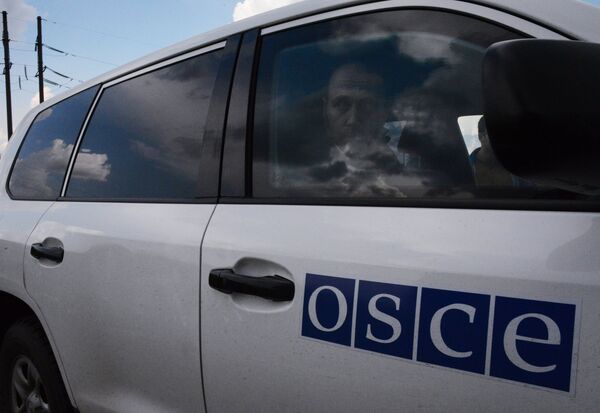 © RIA Novosti . Natalia Seliverstova
/
Go to the mediabank
Subscribe
International
India
Africa
The Organization for Security and Cooperation in Europe (OSCE) said Tuesday it had lost contact with one of its monitoring teams in the eastern Ukrainian city of Donetsk.

MOSCOW, May 27 (RIA Novosti) – The Organization for Security and Cooperation in Europe (OSCE) said Tuesday it had lost contact with one of its monitoring teams in the eastern Ukrainian city of Donetsk.

The contact was lost on Monday evening, when the team of four international members of the Special Monitoring Mission (SMM) was on a routine patrol east of Donetsk.

"We have been unable to re-establish communication until now," the OSCE said in a statement.

The team of four international SMM members was on a routine patrol east of Donetsk when contact with them was lost, the organization said

"We are continuing with our efforts and utilizing our contacts on the ground. The Ukrainian Government as well as regional authorities have been informed of the situation," the statement said.

The OSCE has played a vital role in trying to resolve the conflict in Ukraine. Besides sending its observers to the country, the organization has recently unveiled a roadmap for the reconciliation process in the nation with concrete steps to reduce violence, disarm illegal armed groups as well as facilitate national dialogue and elections. It also stipulated a series of high-level roundtable discussions aimed at bringing all sides of the Ukrainian conflict to the negotiating table.

On Sunday, Ukraine held a presidential vote, where more than 56 percent of voters showed support for businessman Petro Poroshenko. The OSCE said Monday its observers had found the vote to be in line with international standards.

The Russian Foreign Ministry on Monday called on the OSCE to provide Moscow with a thorough report on clashes between government troops and federalists in Ukraine’s eastern city of Donetsk. Moscow has repeatedly called on Kiev to halt the military operation against its own population.

On Monday, a group of Russian journalists came under fire in Donetsk airport, where a shootout between local self-defense forces and Ukraine’s National Guard continues. According to media reports, at least two people were injured.

Over the past two months, since Kiev’s authorities launched a special operation to crack down on pro-federalization supporters in southeastern regions of Ukraine, dozens of people have been killed in violent clashes between Ukrainian troops and forces of self-proclaimed People’s Republic of Donetsk.

Moscow has repeatedly condemned Kiev’s military operation against its own people, calling it a punitive act and urging the international community to take immediate measures to stop the violence in Ukraine.