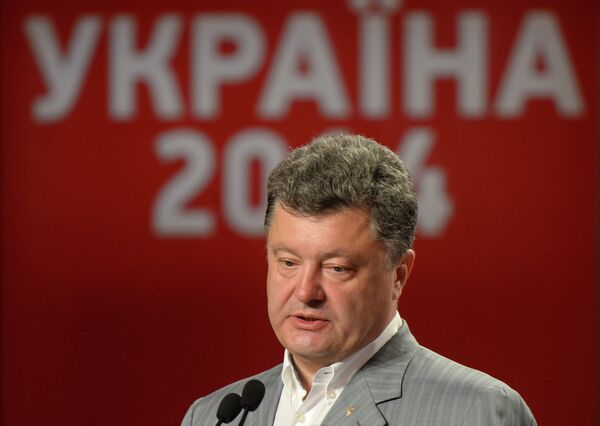 The success of Petro Poroshenko, the likely incoming Ukrainian president, will depend on decisions made in the West, as Ukraine’s domestic policy decisions are now brokered there, government consultant and publicist in Germany Christoph Horstel told RIA Novosti.

MOSCOW, May 26 (RIA Novosti), Daria Chernyshova – The success of Petro Poroshenko, the likely incoming Ukrainian president, will depend on decisions made in the West, as Ukraine’s domestic policy decisions are now brokered there, government consultant and publicist in Germany Christoph Horstel told RIA Novosti.

“Little can be said about Poroshenko’s chances of success, since the major power brokers of Ukrainian interior politics nowadays sit in the West, mainly in Washington,” Horstel said. “Poroshenko has little staff of his own and just a small party behind him. His powers are limited.”

“He [Poroshenko] will have to try and rein in Tymoshenko, if he doesn't want to be pulled apart by her impetus early on. Since she has already brought on a very nationalist and anti-Russian agenda, this will be difficult to handle,” Horstel said.

“Both politicians have declared a revisionist standpoint on the Crimea issue – but a return of Crimea to Ukraine is unthinkable as long as Russia has any breath left. The Crimea declarations may therefore be regarded as a face saver and a compliment to Washington at best,” he added.

As for Kiev’s relations with the the country’s eastern regions, including Donetsk and Luhansk, which have held self-determination referendums and established self-proclaimed people’s republics, Poroshenko vowed to restore interior peace in Ukraine, though he has yet to specify how.

He also stressed that Poroshenko was wise enough to extend his hand to Russia.

“Russia has gone very far with its offer of bilateral talks, thus openly acknowledging the result of this round of snap presidential elections in Ukraine as announced. Should Kiev now show any sign of recognition of Lavrov's diplomatic candy, things may go well. Should Kiev insist on a new multilateral round of talks, possibly in Geneva or in another mode, the door is open to new trouble ahead,” Horstel said.

He also suggested that a Geneva-based six-step road map for conflict resolution is urgently needed.

“The Ukraine question hinges on two items: Is the West ready to acknowledge Crimea's access to mother Russia and refrain from further efforts to tie Ukraine up further within EU and NATO spheres, association and other forms notwithstanding. Then all Europeans may share a sigh of relief,” Horstel explained.

However, Washington’s intransigence in these two issues “is equivalent to a call for more of the same: conflict,” he added.