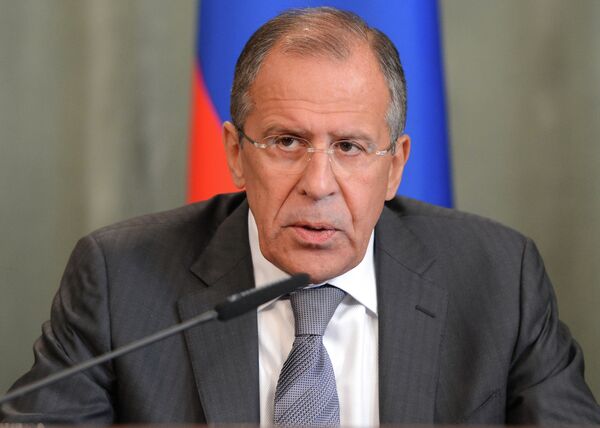 “Direct ties between Moscow and Kiev exist, they have never stopped. We will be ready, taking into account the will expression that took place, and the results that we respect, to establish a pragmatic and equal dialogue on the basis that exists, I mean the implementation of all agreements including on trade, economy and gas issues,” Lavrov said.

Moscow is ready for dialogue with Ukraine’s Petro Poroshenko, who leads the Ukrainian presidential election with over 50 percent of votes, but not with Western mediation, Lavrov said.

Russia has noted Poroshenko’s statement that his first visit in case of victory will be to Donbass in Eastern Ukraine, Lavrov said.

“We have noticed Petro Poroshenko’s statement saying that his first visit from in Kiev in case of his victory in the presidential election will be to Donbass. We always support the establishing of real dialogue between those who have the power in Kiev and all the regions in Ukraine, and we are convinced that this is the key for the settlement of the deepest crisis in Ukraine, [the crisis] we are witnessing,” Lavrov said.

Poroshenko, dubbed Ukraine’s “chocolate king” by Forbes magazine, said on Sunday he would present a range of laws on the settlement of the situation in the crisis-hit country.

The May 25 early presidential election came amid a large-scale military operation launched by the new Kiev authorities to crack down on protesters refusing to recognize the legitimacy of the government.