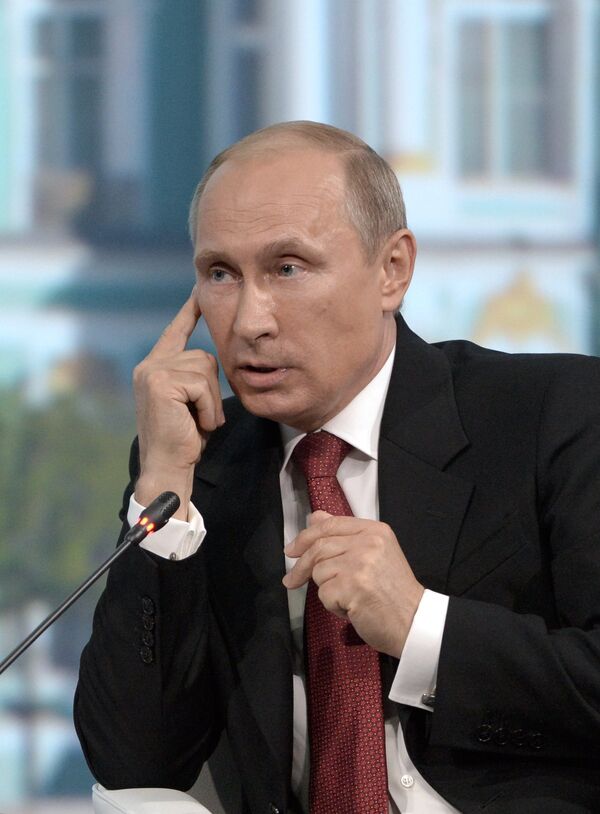 © RIA Novosti . Alexei Danichev
/
Go to the photo bank
Subscribe
The situation that has appeared in Ukraine is very important for Russia but is only a technical issue for the United States, Russian President Vladimir Putin said Friday.

ST. PETERSBURG, May 23 (RIA Novosti) – The situation that has appeared in Ukraine is very important for Russia but is only a technical issue for the United States, Russian President Vladimir Putin said Friday.

"In regard to Ukraine, you know what the problem is. For us it is extremely important, but in America questions on Ukraine were decided on a technical level. I personally handled the problem," Putin told the annual St. Petersburg International Economic Forum.

Official delegations from 62 countries and CEOs of 146 major world companies are attending the forum this year, but the European Union, US and NATO representatives have refused to attend.

Putin also accused Western countries of supporting the unconstitutional coup in Ukraine at a time when Moscow was calling for a way out of the crisis in the country through dialogue.

The statement came at a time of strained Russia-US relations, after the US, together with the EU, imposed sanctions on Russian officials for allegedly escalating the situation in Ukraine.