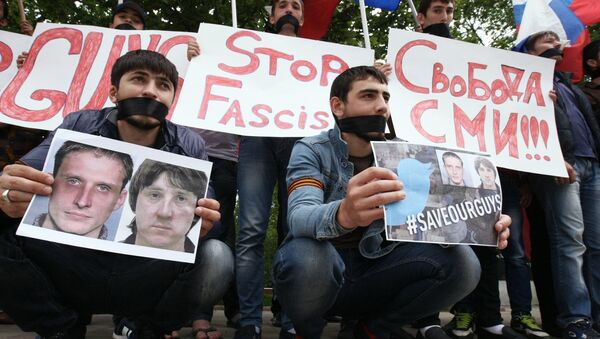 BRUSSELS, May 23 (RIA Novosti) – US authorities are pressuring non-governmental organizations to ignore the detention of Russian journalists in Ukraine, a source at a prominent media rights group told RIA Novosti Friday.

"The US government agencies send us and our colleagues pressing requests not to protect the interests of Russian journalists, who work on the Ukrainian territory and get detained by the security forces of that country," said the source, who preferred not to give their name or the name of the organization.

"Their explanation is that Russian journalists have completely discredited themselves, as they had allegedly witnessed at interrogations without interfering with the ill-treatment of the detained, often hide their faces, interact with terrorists, and thus, take their side," the source added.

Journalists of Russian news portal LifeNews, Oleg Sidyakin and Marat Saichenko, were detained May 18 by the Ukrainian National Guard near the city of Kramatorsk in the Donetsk region after they caught on camera a UN-marked military helicopter apparently used in a special operation targeting demonstrators.

They were later accused of assisting terrorism in the region. Their current whereabouts are unknown. Russian authorities have repeatedly issued calls for their freedom.

The US insists that Russian journalists adhere to a "wrong" viewpoint, provide "nonobjective" coverage of events, and justify the actions of "separatists and armed terrorists" in their reports, the source said.

"This document – the instructions – also mentions that Russian media uses separatists attributes, the so-called St. George Ribbons. That is why their interests should not be protected," the source added.