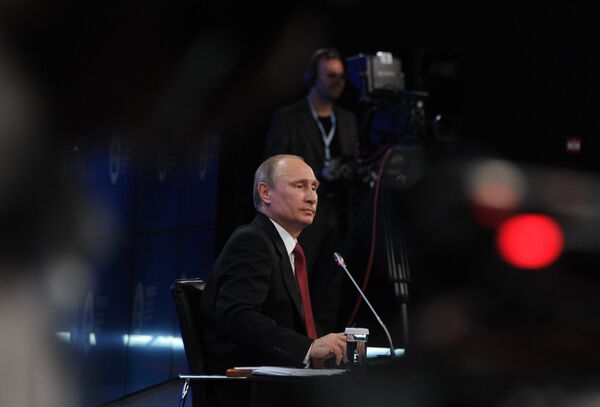 The US is to blame for whistleblower Edward Snowden ending up in Moscow, but Russia is not the type of country that hands over fighters for human rights, Russian President Vladimir Putin said Friday.

ST. PETERSBURG, May 23 (RIA Novosti) – The US is to blame for whistleblower Edward Snowden ending up in Moscow, but Russia is not the type of country that hands over fighters for human rights, Russian President Vladimir Putin said Friday.

“[Snowden] arrived at our transit zone and later it was explained that no one wanted him … And they [the Americans] scared everyone, and he ended up in our transit zone. What were we supposed to do? Russia is not the type of country that gives up fighters for human rights,” Putin said during the plenary session of the St. Petersburg International Economic Forum.

“Why did [the Americans] scare the whole world? If they can force planes down with presidents on board, then they could have forced down anything with Mr. Snowden on board anywhere,” he said.

Last month, former US intelligence whistleblower Edward Snowden, who was granted asylum in Russia last year, sent a video-recorded question to Putin’s annual Q&A session asking the president whether the Russian government also intercepts data on its own citizens.

Putin answered that Russia has no such programs, as the country can neither financially nor technically afford to conduct such large-scale surveillance. He added the country likewise does not monitor telephone calls on a mass scale, as does the United States.

Last June, Snowden leaked information about the extensive electronic surveillance programs conducted by the US government around the globe, including eavesdropping on American citizens and foreign leaders. The revelations have sparked domestic controversy and strained relations between the US and its allies.

The US authorities have rejected claims that Snowden is a whistleblower, insisting that he committed crimes and should stand trial at home. They charged Snowden with espionage and revoked his passport.

The 30-year-old has been residing in Russia for a little under a year, after local authorities granted him temporary asylum, which he sought in 21 countries. He is now awaiting a renewal of his asylum status in June.