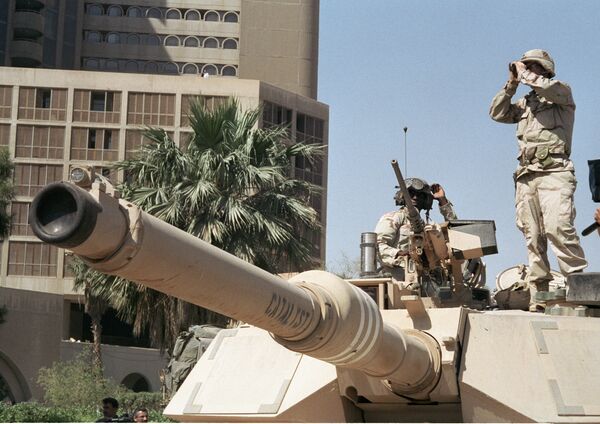 © RIA Novosti . Davydov
/
Go to the photo bank
Subscribe
The efforts to counter the returning US and foreign nationals who fought in Syria clashes with the so-called “intelligence dilemma” with governments reluctant to share their collected data, Executive Director of the National Consortium for the Study of Terrorism and Responses to Terrorism (START) told RIA Novosti Friday.

MOSCOW, May 23 (RIA Novosti), Nikita Alentyev – The efforts to counter the returning US and foreign nationals who fought in Syria clashes with the so-called “intelligence dilemma” with governments reluctant to share their collected data, Executive Director of the National Consortium for the Study of Terrorism and Responses to Terrorism (START) told RIA Novosti Friday.

“It falls to the intelligence community to identify these individuals prior to or upon their return to the country, or more worryingly, before they travel to a third country where they may enjoy Visa waiver status. The international aspect of this problem highlights the importance for governments to share information that they are frequently very hesitant to share because it may highlight the sources, methods, or intentions behind their intelligence work.  This is called the intelligence dilemma,” William Braniff, Executive Director of the National Consortium for the Study of Terrorism and Responses to Terrorism (START), explaining that “governments are not always willing or able to act on the intelligence that they have gathered.”

According to US intelligence sources, the number of American extremists who are returning from Syria is higher than previously estimated, with more than 100 Americans joining the jihad in Syria to fight alongside Sunni terrorists there.

START Executive Director drew on the findings of a noted terrorism scholar Thomas Hegghammer, whose research suggests that approximately 1 out of 9 individuals that leave Western countries return and pose a threat to domestic national security, which, according to Braniff, “is illustrative and helps to frame the question.” This echoes the statement of Assistant Attorney General John Carlin, the head of the National Security Division, who said, “the problem of foreign fighters going to Syria is a significant national security threat.”

Braniff further explained the difficulties associated with tracking this kind of threat to US national security.

“Given the large pool of individuals that have left Western countries to fight in Syria, and the fact that the law enforcement and intelligence communities do not know which individuals to focus on because they cannot predict the stimuli that each individual will be exposed to in Syria, the threat is genuine but hard to quantify,” he concluded.

Reacting to the threat, US Justice Department has asked a top National Security prosecutor Stephen Ponticello to be the point-person for prosecutions across the country involving Americans and others who have gone to Syria to train or fight with terrorists there, according to a Justice Department official, as reported by ABC News Thursday.