OPINION: Sanctions Backfire Against The West 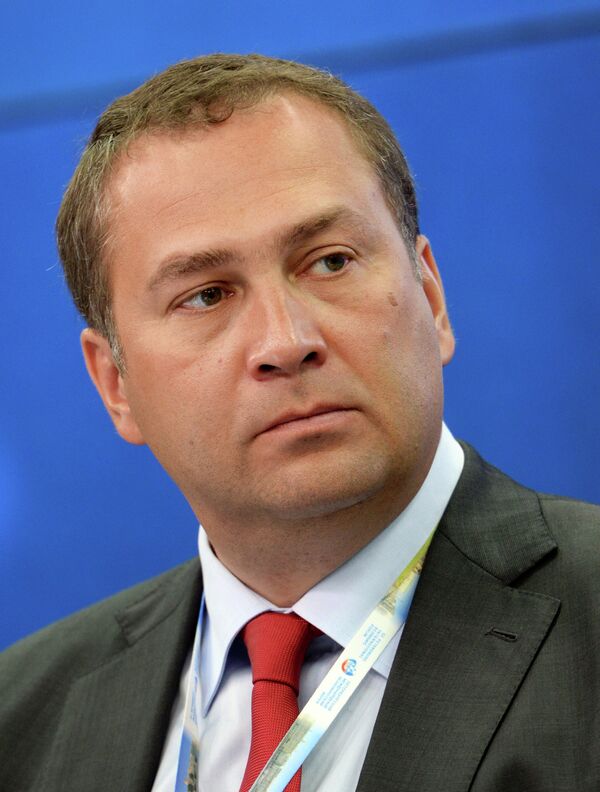 © RIA Novosti . Alexei Danichev
/
Go to the photo bank
Subscribe
Sanctions imposed by the Western countries have negative impact but mostly on those who resorted to them, having an opposite effect and not impacting Russia, Chairman and co-founding partner of Egorov Puginsky Afanasiev & Partners law firm Dimitry Afanasiev told RIA Novosti on the sidelines of St. Petersburg International Economic Forum.

ST. PETERSBURG, May 23 (RIA Novosti), Daria Chernyshova - Sanctions imposed by the Western countries have negative impact but mostly on those who resorted to them, having an opposite effect and not impacting Russia, Chairman and co-founding partner of Egorov Puginsky Afanasiev & Partners law firm Dimitry Afanasiev told RIA Novosti on the sidelines of St. Petersburg International Economic Forum.

“I think the main [problem] of the sanctions is that they undermined the trust the world had in the US, who controls a lot of global institutions, such as MasterCard, companies like Cisco which produces gadgets used around the world,” Afanasiev said. “So the trust in the products of major American companies is undermined by the fact that the customers are now realizing there is a government interference in the business of those countries that could make those services and goods either inaccessible to the market without any notice, such as in the case of unilateral sanctions which have not been approved by the United Nations,” he said

Speaking about the Russian economy, Dimitry Afanasiev noted that so far the impact of sanctions has been minimal. “But obviously if they were to increase, the impact would be stronger and more negative, and no doubt the US is a very substantial economy and can inflict a lot of pain,” he noted.

Moreover, sanctions are not affecting the public opinion in Russia, and have an opposite impact on Putin’s approval ratings which are at all-time highs.

“I don’t think that the Russian people are going to suddenly betray their national interest because of economic hardship. Russians say that we’ve been able to overcome Napoleon and Hitler, and we will overcome this time,” Afanasiev said. “So in this respect sanctions cannot achieve the objective of alienating the current president form the people who voted for him, as in fact his support is rising.”

In the European direction, sanction too have disadvantages for the West. Russian trade with Europe is quite substantial, Afanasiev pointed out. “So the third effect of sanctions is likely to be detrimental to European companies. Up to half a million of jobs in Europe will be affected in the event of sanctions increase in scope and their intensity,” he said.

While Russia can substitute European products and services if they are unavailable, by looking eastward or by its domestic capacities, for the EU disruption of trade ties with Russia could be hard to deal with.

“It is also quite evident that the European economy will suffer and Putin was right saying that there is a commercial interest on the United States’ part in increasing their presence, and getting more control of European businesses and getting a competitive advantage,” Dimitry Afanasiev said.

Russian President Vladimir Putin suggested Friday that the US planned to receive competitive advantages in trade and economic ties with Europe by sanctioning Russia.

“Insisting on imposing sanctions against Russia, I have the suspicion that maybe our American friends, and they’re pretty sophisticated guys, they, perhaps, even want to get certain competitive advantages in their trade and economic ties in Europe? I simply just don’t see, don’t understand any other incentive motives that are that serious or deep, but I hope that common sense prevails,” Putin said.

Explaining the idea, Dmitry Afanasiev said the US intention to import natural gas to Europe “because of the big bad Russian bear,” is yet another murky question.

“And the fact that it is murky smells of politics. In the US the land and soil, and sub-soil resources belong to the owner of the land on the surface,” Afanasiev explained, while in Europe the owner is state or the Queen as in the UK.

“So the Americans are actively lobbying to change the laws in Europe so they could buy the farmers’ land to do shale gas. The perception of Russia as a threat is quite helpful in persuading the Europeans to change those laws,” he continued.

The lawyer stressed that the Ukrainian situation has accelerated a set of global processes, while being a pretext for achieving larger goals.

“There are some issues that are global in nature, where the kind of situation around Ukraine is actually a small piece of the puzzle, and in fact much bigger interests are at stake,” Afanasiev told RIA Novosti.