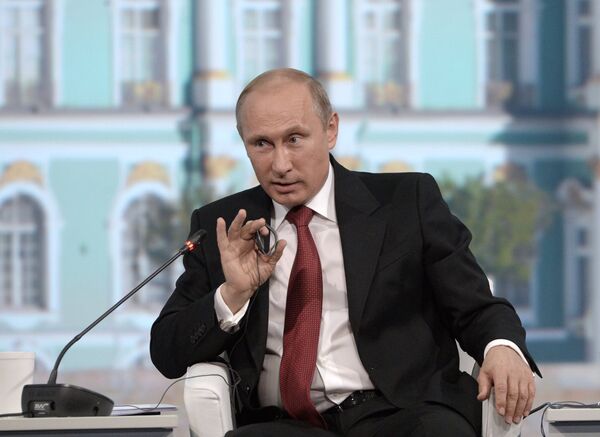 “We are working with those people today who are controlling the power [in Kiev], but after the elections, of course, we will work with the newly elected structures,” Putin said.

“I hope that when the elections are over, all of these military activities will immediately stop,” he said.

Had the change in power in Ukraine happened through elections instead of a coup, Russia would have continued its support for the ailing Ukrainian economy, he said.

“They should have held elections, and those same people would have come to power except it would be legal. We, like idiots, would have paid $15 billion, which we promised and keep the prices on gas low, and then continued to subsidize the economy,” Putin said.

He expressed his assurance that the situation in Ukraine would settle down and that Moscow and Kiev will be able to normalize their bilateral relations.

“I’m an optimist, and, in general, I haven’t lost my assuredness that the situation there now, in Ukraine, one way or the other at some time will settle down and we’ll find the strength to normalize relations,” Putin said.

Ukraine underwent a Western-backed regime change resembling a military coup in February. The country’s parliament ousted President Viktor Yanukovych, changed the constitution and scheduled an early presidential election for May 25.

Following the refusal of the Russian-speaking southeast of Ukraine’s to recognize the legitimacy of Kiev’s new authorities, the Luhansk and Donetsk regions have seen violent clashes between government soldiers and protesters after the country’s interim government launched a large-scale military operation in mid-April. Both sides have suffered dozens of casualties.

The special operation is still under way even though the Ukrainian parliament approved a so-called memorandum of peace and consent earlier this week, which called on the return of troops stationed in eastern Ukraine to their permanent bases.