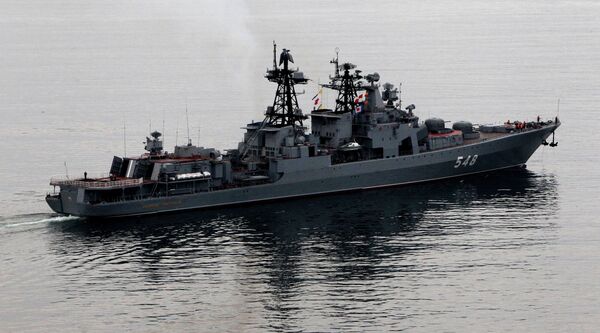 A squadron of warships from Russia’s Pacific Fleet sailed Thursday into the East China Sea to participate in the joint Russia-China Naval Interaction 2014 exercises, a military spokesman told RIA Novosti.

The military forces involved in the maneuvers will first take up positions in designated areas, according to Martov. The crews will then perform various training scenarios to defend the ships.

On Thursday night, Russian and Chinese sailors will conduct a drill to combat underwater frogmen and stop hypothetical terrorists from breaking through defensive lines on speed boats. The sailors of both countries will work together to escort vessels, to release a captured vessel and to detect and identify joint air defense targets.

An opening ceremony on Tuesday preceded the exercises at the naval port in Wusong. It was attended by Russian President Vladimir Putin and Chinese President Xi Jinping. The heads of states agreed to hold these joint military exercises again next year, timing the event to coincide with the 70th anniversary of victory in World War II.