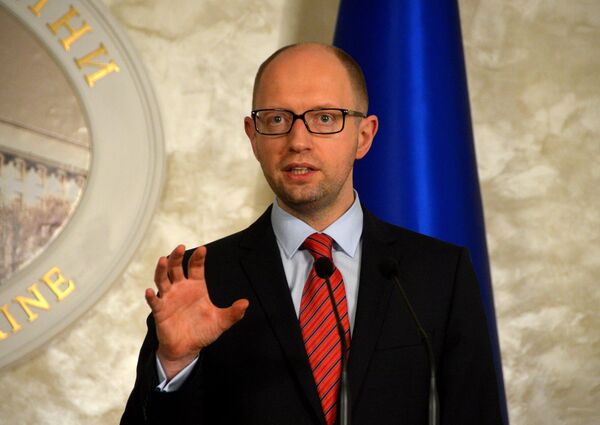 © RIA Novosti . Evgeny Kotenko
/
Go to the photo bank
Subscribe
Ukraine’s interim Prime Minister Arseny Yatsenyuk has ruled out bilateral talks between Kiev and Moscow, saying de-escalation in the crisis-hit country could only be discussed at an international scale.

KIEV, May 21 (RIA Novosti) – Ukraine’s interim Prime Minister Arseny Yatsenyuk has ruled out bilateral talks between Kiev and Moscow, saying de-escalation in the crisis-hit country could only be discussed at an international scale.

“There is no way we will consider bilateral negotiations between Ukraine and Russia under these circumstances,” the self-proclaimed premier said Wednesday during the third roundtable session in the southern Ukrainian city of Mykolaiv.

The dialog on national unity has been organized under the auspices of the Organization for Security and Cooperation in Europe (OSCE).

Yatsenyuk emphasized that the next round of talks could bring together Ukraine, Russia, the United States and the European Union, but said Kiev expected them to come up with tangible proposals.

“To treat with the Russian Federation, we will first need to restart our relations in the four-lateral format,” the regime’s official pointed out. He added Ukraine would never plead Russia for financial aid.

The first all-Ukrainian round table for national unity in the framework of the OSCE was held in Kiev last week.

On April 17, top diplomats from Russia, Ukraine, the EU and the US meet in Geneva to agree a number of conditions that urged the coup-imposed regime and its opposition in Ukraine to refrain from violence, extremism and provocations, to disarm militants and launch a national dialog on constitutional reform.

Russia has called the Western-backed military operation against the protesters a «punitive act," and accused Ukraine’s authorities of waging a war against their own people.