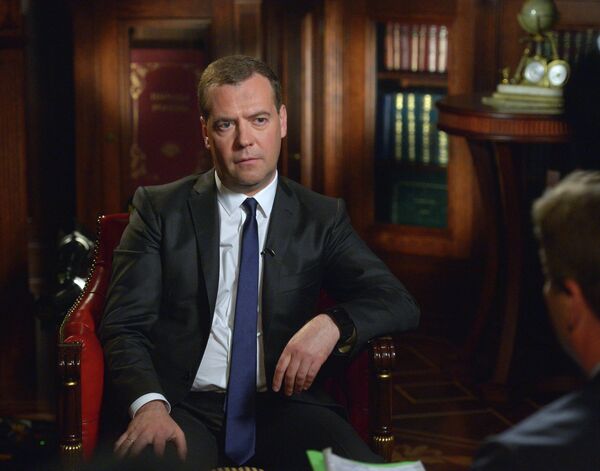 “Taking into consideration what these sanctions may mean, obviously we are looking at various scenarios. None of these scenarios is catastrophic for our country’s economy, though, of course, some limitations may be quite painful,” Medvedev said during an interview with Bloomberg TV.

Tensions between Russia and the West rose after the ouster of Ukrainian President Viktor Yanukovych in February, followed by the rise to power of Ukrainian nationalist politicians in the new government in Kiev, which Moscow considers illegitimate.

Since March, the US and EU have imposed targeted sanctions against Russian officials, freezing their assets and banning them from obtaining visas, as well as against 17 Russian companies. The leaders of the G7 group of nations have further threatened Russia with sanctions against key sectors of the country’s economy in the event of a further escalation in the Ukrainian crisis.

The EU added two Crimean companies and 13 individuals to a Russian sanctions list last week over the escalating situation in Ukraine. In total, the EU sanctions now target 61 people, including high-ranking Russian officials.

The EU has said it has a three-stage sanctions process. The third stage, not yet reached, would be broad economic sanctions against entire sectors of the Russian economy.

Swedish Foreign Minister Carl Bildt earlier said whether or not EU foreign ministers consider new sanctions against Russia will depend on the situation in Ukraine, and in particular the upcoming May 25 presidential election.

Moscow has repeatedly stated that the language of sanctions is "inappropriate and counterproductive" and warned its Western partners about the "boomerang effect" that sanctions would have.