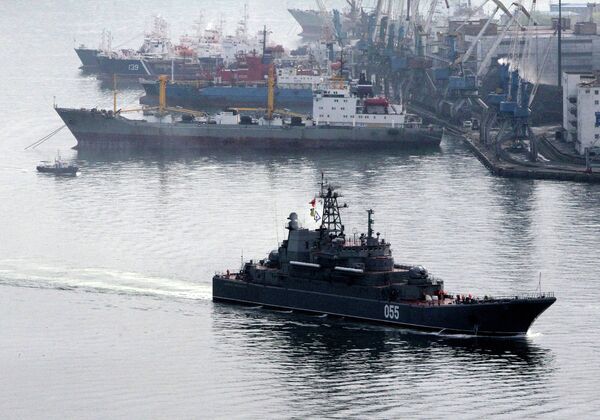 A Russian Pacific Fleet squadron, led by the guided-missile cruiser Varyag, has arrived in China to participate in a joint drill Naval Interaction-2014, the Russian Defense Ministry announced on Monday.

MOSCOW, May 19 (RIA Novosti) — A Russian Pacific Fleet squadron, led by the guided-missile cruiser Varyag, has arrived in China to participate in a joint drill Naval Interaction-2014, the Russian Defense Ministry announced on Monday.

"The Pacific Fleet squadron, made of the guided-missile cruiser Varyag, fleet destroyer Bystry, anti-submarine ship Admiral Panteleyev, amphibious ship Admiral Nevelskoy, service vessels of the Ilim and Kalar, has arrived to the naval port in Wusong (Shanghai, People's Republic of China), to participate in the Russo-Chinese naval drill Naval Interaction-2014, which will take place at the end of May in the waters of the East Chinese Sea," the ministry's statement said.

The drills will take place on May 20-26 and will primarily focus on raising the levels of difficulty of the combat vessels' joint actions at sea, Tian Zhong, deputy commander of the Chinese Navy, said in his welcome speech. The two nations' fleets will interact for the first time in a mixed-squadron exercise, which will include joint missile-artillery target attacks on various distances and will separately practice antisubmarine actions.

"There is no doubt the next Russo-Chinese naval drill will serve further development of our relations. Regardless of the difficulty of the task in front of the participants, the qualification level of our marines will allow to execute them in the largest volume and to highest quality," said the Navy Deputy Commander-in-Chief, Vice Admiral Alexander Fedotenkov.

Until the exercises begin on May 21, the two crews will be preparing and negotiating details.

The drills come as Russian President Vladimir Putin is due to arrive in Shanghai on an official visit May 20 to cement economic ties with China, including on energy, the Kremlin said.

This will be the two countries' third such joint training exercise this year, aimed at strengthening the cooperation of their fleets and the ability to withstand various threats in open water.

Last year, the drills of the kind took place in July in the Sea of Japan and involved about 20 ships and vessels from both sides.