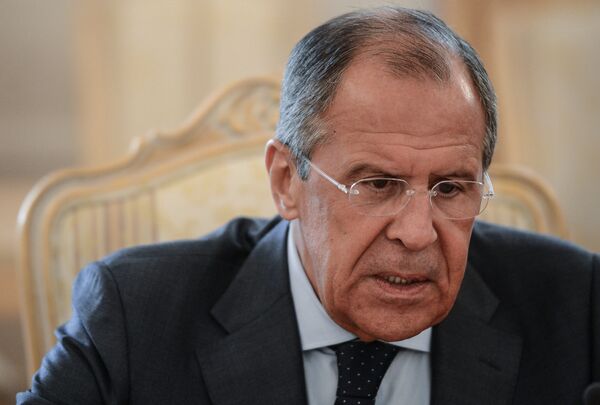 © RIA Novosti . Vladimir Astapkovich
/
Go to the photo bank
Subscribe
Moscow is concerned by Kiev’s attempts to hide the truth about the tragedy in Odessa, including on the alleged use of toxic chemicals, Russian Foreign Minister Sergei Lavrov said Monday.

MOSCOW, May 19 (RIA Novosti) – Moscow is concerned by Kiev’s attempts to hide the truth about the tragedy in Odessa, including on the alleged use of toxic chemicals, Russian Foreign Minister Sergei Lavrov said Monday.

Moscow demands an investigation be opened into reports that people died not of smoke inhalation but of a “poisonous chemical substance,” with many of them being killed after they managed to flee the burning building, Lavrov said.

Russia seeks an unbiased investigation into all the facts, including reports that around 1,000 gunmen together with foreign mercenaries had arrived in Odessa on the eve of the tragedy, Russia’s top diplomat said.

Moscow has turned to the United Nations and the Organization for Security and Cooperation in Europe with a request to hold an international investigation into the tragedy in Odessa, Lavrov said.

“We will push so that the investigation is objective and impartial and for that it absolutely needs to be international. I sent the according letters to the UN Secretary General and the Secretary General of the OSCE so that they take this situation under their control and make sure that the investigation is held transparently under the aegis of international organizations,” Lavrov said.

According to the latest Ukrainian police reports, six victims of the Odessa May 2 tragedy died from gunshot wounds, 32 choked to death and 10 died when jumping out of windows after the Trade Unions House was set on fire.

The 48 victims include seven women and one minor. Three bodies have not been identified yet. Another 214 people were injured. Police have denied reports that dozens of people went missing following the clashes.

The clashes, which broke out May 2 between pro-federalization activists on one side and fans of the Odessa and Kharkiv football teams on the other, joined by Euromaidan activists, were the bloodiest episode of violence in Ukraine since the start of the Ukrainian crisis in February.

Although officials insist most of the victims died of smoke inhalation or were killed when jumping out of windows, media rumors suggest that many of the dead were poisoned by an unknown toxic chemical.

Ukraine’s Security Service confirmed that an unknown substance was found in the building which has been sent for international examination.