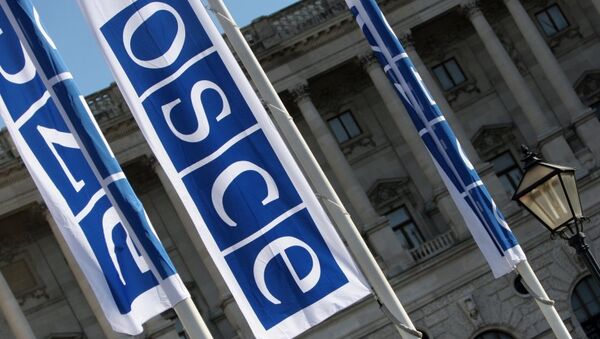 © Photo : OSCE/Mikhail Evstafiev
Subscribe
International
India
Africa
An OSCE report on Ukraine ignores the Kiev government’s violations of human rights, as well as the rise of neo-nationalist and xenophobic sentiments in the society, a senior Russian diplomat said.

MOSCOW, May 16 (RIA Novosti) – An OSCE report on Ukraine ignores the Kiev government’s violations of human rights, as well as the rise of neo-nationalist and xenophobic sentiments in the society, a senior Russian diplomat said.

“[The report] ignores facts of blatant violations of basic human rights – such as the right to express opinions freely – by the de-facto authorities in Kiev with support from the West. It also lacks information about the rise of neo-Nazi, xenophobic, ultranationalist and anti-Semitic sentiments in Ukraine,” Konstantin Dolgov, Russian Foreign Ministry's Special Representative for Human Rights, Democracy and the Rule of Law, said in his Twitter blog.

He also said the report fails to mention “the destructive role of Maidan activists,” whose violent actions against law enforcement officers, including the use of firearms against them, have resulted in a state coup that brought neo-Nazis and ultranationalists to power.

“The OSCE also showed little interest in the punitive operation against residents of the southeast [who question the legitimacy of the interim Kiev government],” Dolgov said.

“Instead, the authors point at alleged violations of human rights in Russia’s Republic of Crimea and in southeastern regions of Ukraine, offering no proof. We call on the OSCE leadership and its special mission in Ukraine to give a full and comprehensive assessment of the disastrous human rights situation in the country,” the diplomat said.

A state coup took place in Ukraine of February 22, when erstwhile opposition, supported by violent protests in the streets of the capital Kiev, seized power, ousted President Viktor Yanukovych and appointed elections for May 25. Moscow says doubts the legitimacy of the incumbent government and says its legitimacy will depend on the transparency of the political process in Ukraine and the respect for interests of regions.

The coup-imposed government launched a military operation in Ukraine’s eastern and southeastern regions on April 15 with an aim to crush dissent among residents who refuse to recognize the legitimacy of central and regional authorities. Protesters want broader autonomy for their regions and demand to treat the linguistic and cultural peculiarities of their regions with respect.