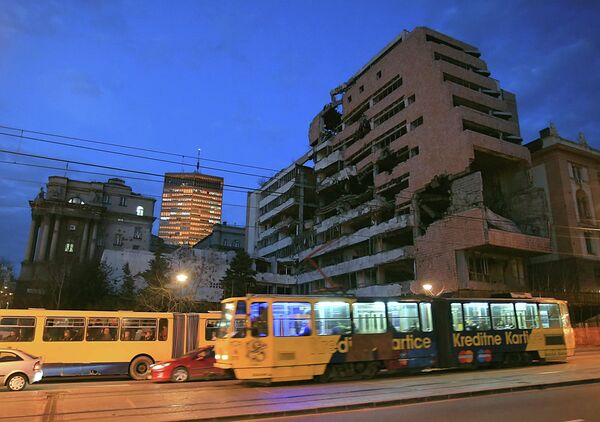 © RIA Novosti . Ruslan Krivobok
/
Go to the photo bank
Subscribe
Experts from the Russian Emergency Situations Ministry have surveyed regions of the former Yugoslavia, including Kosovo, that were bombed by depleted uranium munitions of NATO air forces, a ministry official said Wednesday.

MOSCOW, May 14 (RIA Novosti) – Experts from the Russian Emergency Situations Ministry have surveyed regions of the former Yugoslavia, including Kosovo, that were bombed by depleted uranium munitions of NATO air forces, a ministry official said Wednesday.

"The task force of the EMERCOM risked their lives to carry out a complex and responsible mission on radiation and chemical examination of the territory of Yugoslavia affected by the NATO bombings, including those with depleted uranium," said Vladislav Bolov, head of the ministry's Antistikhiya center.

The task force, working under the international program Focus, surveyed the grounds and facilities in 14 cities and localities in Serbia, Vojvodina and Kosovo. The results of the survey have not yet been released.

Fifteen years ago, NATO aircraft began bombing the Federal Republic of Yugoslavia. The NATO military operation was undertaken without the approval of the UN Security Council, rather on the basis of statements by Western countries that Yugoslav authorities were carrying out an ethnic cleansing in Kosovo.

NATO actively used depleted uranium warheads during the bombing campaign. Cluster and high-explosive bombs were also widely used, many of which did not explode and remain buried in the ground today.

In general, the victims of the aggression were civilians. Some 2,500-3,500 people died during the 78 days of continuous air strikes, including 89 children, according to various sources. A further 12,500 people were injured. A total of 1,031 military and police personnel were killed, and 5,000 wounded.