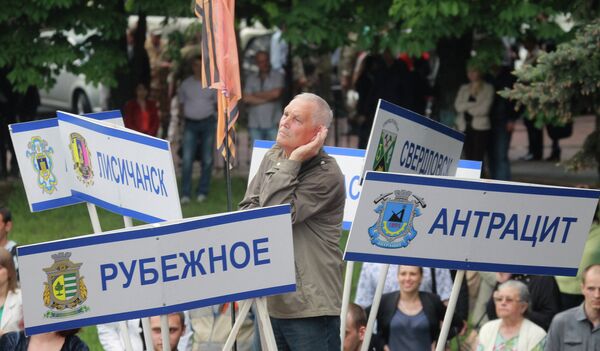 “The initiative of unifying the republics was voiced yesterday. Preliminarily, talks should be held. It is up to the leadership to decide. As of 10:00 am local time such talks are being held,” the spokesman said.

Both republics declared themselves sovereign states on Monday with Donetsk planning to ask Moscow to join Russia. The Luhansk leadership also said it did not rule out the possibility of a referendum on becoming part of Russia.

According to local officials in Donetsk and Luhansk, some 90 percent of voters in both regions supported the measure to secede from Ukraine and become independent sovereign states during referendums on Sunday.

Moscow said it respected the will of the people in Ukraine’s southeastern provinces and hoped the regime in Kiev would do the same. The US and EU denounced the results of the vote.