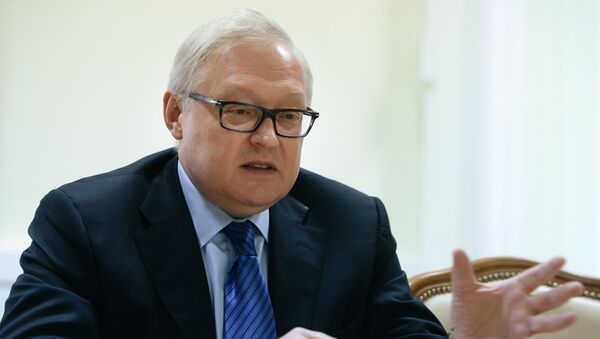 “We are sorry to see the sanctions express steaming downhill as if the driver wasn’t there. I mean their [EU’s] policy is absolutely feckless, irresponsible and out of touch with reality,” the Russian minister said referring to the EU’s recent decision to extend its sanctions list.

On Monday, EU foreign ministers agreed at a meeting to add two Crimean companies and 13 individuals to the sanctions list over the escalating situation in Ukraine.

“Instead of working to actually improve the situation [in Ukraine], de-escalate it, disarm the Right Sector and initiate a direct dialog between the authority in Kiev and the regions, our EU colleagues are pursuing a one-sided, one-dimension, unvarying policy that is not worthy of the European Union,” Ryabkov told reporters at a Vienna airport ahead of the Iran nuclear talks.

The document also lists two Crimean companies — PJSC Chernomorneftegaz and Feodosia — whose assets were transferred to Crimean authorities after reunification with Russia.

Since March, the US and EU have imposed targeted sanctions against Russian officials, freezing their assets and banning visas, as well as against 17 Russian companies, over the country’s reunification with the former Ukrainian republic of Crimea.

In addition, the leaders of the G7 group of nations have threatened Russia with sanctions against key sectors of economy in case of a further escalation of Ukrainian crisis.

Moscow has repeatedly stated that the language of sanctions is «inappropriate and counterproductive» and warned the Western partners about the “boomerang effect” that sanctions would have. Some EU members already raised their voice against the possible new sanctions against Russia, as they could damage the European economy.