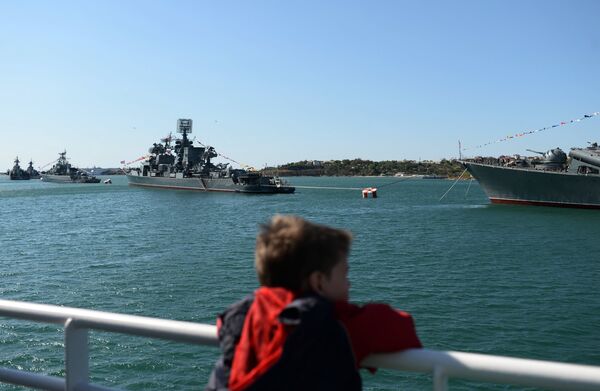 © RIA Novosti . Konstantin Chalabov
/
Go to the photo bank
Subscribe
The Russian Black Sea Fleet will have a sophisticated network of naval and airbases in Crimea following the region’s reunification with Russia, the country's chief naval commander said Tuesday.

MOSCOW, May 13 (RIA Novosti) – The Russian Black Sea Fleet will have a sophisticated network of naval and airbases in Crimea following the region’s reunification with Russia, the country's chief naval commander said Tuesday.

“The Black Sea Fleet will have a network of bases on the Crimean Peninsula, including the main naval base in Sevastopol and other facilities,” Admiral Viktor Chirkov said.

“This infrastructure will be self-efficient allowing us to place comfortably warships, submarines and coastal troops [around the peninsula] with support of developed social infrastructure,” the admiral said.

According to Chirkov, Russia will deploy warships not only in Sevastopol, but also in Feodosia and Donuzlav, while stationing combat aircraft near Yevpatoria and in Belbek.

Russia has stationed its Black Sea fleet in Sevastopol since the city was founded by Empress Catherine the Great as a naval base in 1783. Following the collapse of the Soviet Union in 1991, Russia and Ukraine were embroiled in disputes over dividing the Black Sea Fleet as Crimea and the city of Sevastopol had been symbolically gifted to Ukraine by Soviet leaders in 1954, officially became Ukrainian territories.

After years of controversy, the two sides finally settled their dispute and Ukraine agreed to lease port facilities in Sevastopol to the Russian Navy.

However, following a secession referendum in March the vast majority of voters in Crimea and Sevastopol backed a motion to leave Ukraine and join Russia.

Crimea and Sevastopol, which has a special status within the region, became subjects of the Russian Federation on March 21 after Putin signed reunification documents into law.