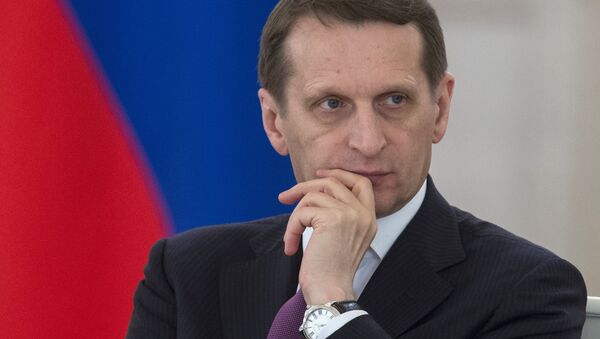 © Sputnik / Sergey Guneev
/
Go to the mediabank
Subscribe
International
India
Africa
Japan’s leadership should not succumb to blackmail by the US in connection with the situation in Ukraine, Russian lawmaker Sergei Naryshkin said Tuesday.

MOSCOW, May 13 (RIA Novosti) – Japan’s leadership should not succumb to blackmail by the US in connection with the situation in Ukraine, Russian lawmaker Sergei Naryshkin said Tuesday.

"I would advise the entire Japanese leadership not to yield to blackmail by the US administration," State Duma Speaker Sergei Naryshkin said at a meeting with Japanese lawmaker Kunio Hatoyama.

At the same time he thanked Hatoyama, who is also the chairman of the Japan-Russia society, for his "consistent and friendly attitude" towards Russia. "I appreciate the fact that your position is not influenced by the pressure of the American politicians,” Naryshkin said, adding that it is not the first time Hatoyama has travelled to Moscow.

He stressed that Russian-Japanese relations have a rich history and that in many years of cooperation the two countries have accumulated a great potential. "We should not waste this potential and values ​​accumulated over the years of our cooperation for the sake of the US political ambitions,” the speaker of the State Duma said.

In his turn, Hatoyama said he would like to build strong ties with Russia, and therefore he came to Moscow. Hatoyama also invited Naryshkin to the opening of a festival of Russian culture in Japan on June 2, which Naryshkin gladly accepted.

"I plan to visit Japan, to meet with Japanese leaders, politicians and to take part in the opening of the festival of Russian culture in Japan," Naryshkin said.

Since March, the US and EU have imposed targeted sanctions against Russian officials, freezing their assets and banning visas, as well as against 17 Russian companies, over the country’s reunification with the former Ukrainian republic of Crimea.

In addition, the leaders of the G7 group of nations have threatened Russia with sanctions against key sectors of economy in case of a further escalation of Ukrainian crisis.

Moscow has repeatedly stated that the language of sanctions is “inappropriate and counterproductive” and warned the Western partners about the “boomerang effect” that sanctions would have. Some EU members already raised their voice against the possible new sanctions against Russia, as they could damage the European economy.