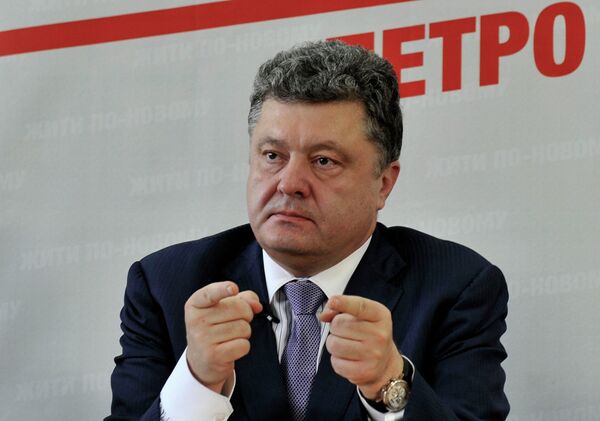 © RIA Novosti . Nikolay Lazarenko
/
Go to the photo bank
Subscribe
Chocolate king and Ukrainian presidential candidate Petro Poroshenko has promised the citizens of the country’s east to hold a referendum on the most urgent issues they are facing should he be elected Ukraine’s next president.

KIEV, May 13 (RIA Novosti) – Chocolate king and Ukrainian presidential candidate Petro Poroshenko has promised the citizens of the country’s east to hold a referendum on the most urgent issues they are facing should he be elected Ukraine’s next president.

“My position is absolutely clear: we should keep every possibility to launch a dialogue and ensure people’s confidence. We are not afraid of any referendums, we will organize them and hold legally,” Poroshenko was quoted as saying in a statement.

“People have the right to express their point of view on any issue,” Poroshenko said, adding that the referendums should focus on the most acute problems.

He also stressed that regional communities should be granted additional power.

“Questions related to culture and language can today be tackled at the local level. And the new president, as soon as he submits a draft constitution, will immediately go to Donbas to discuss it,” Poroshenko said.

Following the February overthrow of President Viktor Yanukovych, the Ukrainian parliament backed by far-right movements amended the country’s constitution and scheduled an early presidential election for May 25.

Some Ukrainian regions, mostly in the country’s east, refused to recognize the legitimacy of the current authorities and called for either broader autonomy or secession from Ukraine.

After independence referendums in Ukraine’s Donetsk and Luhansk regions on Sunday, backed by a majority of citizens, both republics declared themselves sovereign states with Donetsk planning to ask Moscow to join Russia. The leadership of Luhansk also said it did not rule out the possibility of a referendum on becoming part of Russia.

Both republics also announced they would not take part in the upcoming presidential election.