OPINION: UN Unlikely To Recognize Donetsk, Luhansk as Democratic Republics Because of US 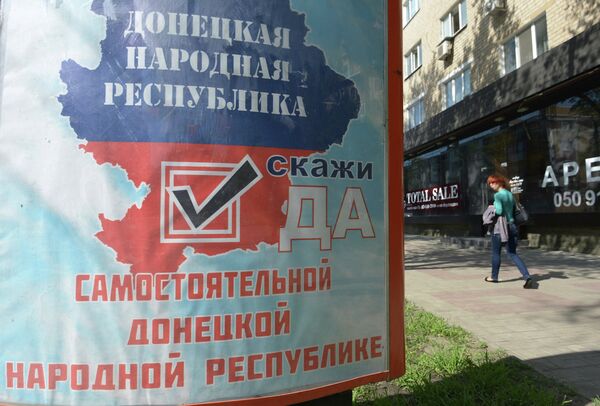 © RIA Novosti . Evgeny Biyatov
/
Go to the photo bank
Subscribe
Countries around the world are likely to recognize Donetsk and Luhansk as democratic republics, however the United Nations influenced by the US will not agree with the initiative, Timothy Alexander Guzman, an independent researcher and writer, told RIA Novosti Tuesday.

MOSCOW, May 13 (RIA Novosti), Daria Chernyshova - Countries around the world are likely to recognize Donetsk and Luhansk as democratic republics, however the United Nations influenced by the US will not agree with the initiative, Timothy Alexander Guzman, an independent researcher and writer, told RIA Novosti Tuesday.

«Although most countries would support the new republics if a vote were to take place since both Donetsk and Luhansk had a democratic referendum on the issue of self-determination, but there is an elephant in the room, and that is the United States," Guzman said. «They have major stake in the voting power at the United Nations, namely the UN Security Council."

He also noted that most countries around the world are likely to recognize Donetsk and Luhansk where over 90 percent of the people voted for for self-determination as newly democratic republics on Sunday. «Keep in mind that several nations already do not recognize the current Ukrainian government as Ecuador's President Rafael Correa declared this past March," Guzman pointed out.

At the same time, Donetsk People's Republic's official spokesman Andrei Kramar said the republic was not planning to press for UN recognition of its independence. Luhansk leadership didn't rule out the possibility of filing an independence bid with the UN.

«For the United Nations to recognize Donetsk and Luhansk as independent states would be extremely difficult as long as the United States is on the UN Security Council," Timothy Alexander Guzman told RIA Novosti. However, the US has supported independence for countries that «would only serve their special interests such as the oil-rich South Sudan when a majority voted for independence from Sudan during a civil war. US oil companies were satisfied with the results.»

«But, when it comes to Palestinian statehood, they normally vote against it, especially since Israel has no interest in a Palestinian state as its neighbor. In 2012 when the United Nations voted to recognize a Palestinian state, but the US and Israel rejected the outcome," Guzman reminded.
Explaining the reasoning of the Obama administration, Guzman said it is concerned because «both new entities will most likely have diplomatic and economic relations with Russia and other nations considered enemy states to Washington, such as Iran and Syria.» The Ukrainian people meanwhile do not want «a neo-fascist regime that will follow Washington's orders to further destabilize the region and place military bases armed with nuclear missiles in close proximity to Russian territory."

He also warned that Washington could back Kiev «under the direction of the CIA to create a civil war or even a «false flag» operation to blame Russia which would justify an invasion to regain political and economic control of the Eastern Ukraine."

Moscow said it respected the will of the people in Ukraine's southeastern provinces and hoped the regime in Kiev would do the same. The US and EU denounced the results of the vote.