Kiev Says No Need to Resume Geneva Talks on Ukraine 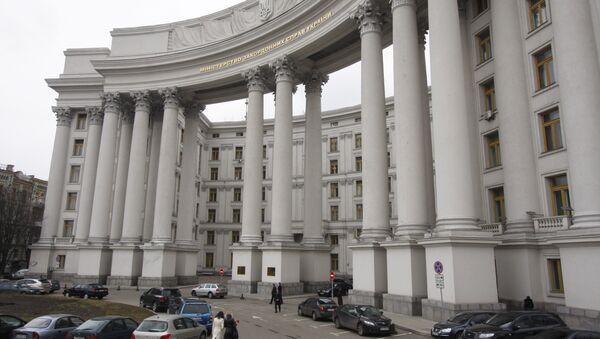 © Sputnik / Grigoriy Vasilenko
/
Go to the photo bank
Subscribe
Ukraine sees no need to hold a new four-party meeting with the EU, Russia and the US until the agreements reached in Geneva on April 17 are implemented, the director of the Department of Information Policy at the Ukrainian Foreign Ministry said Tuesday.

MOSCOW, May 13 (RIA Novosti) – Ukraine sees no need to hold a new four-party meeting with the EU, Russia and the US until the agreements reached in Geneva on April 17 are implemented, the director of the Department of Information Policy at the Ukrainian Foreign Ministry said Tuesday.

“In what concerns the continuation of Geneva agreements, our position is the following: all parties must fulfill the earlier reached agreements in Geneva,” Evgeniy Perebiynis said.

Perebiynis added that Ukraine needs to clarify some points in the “road map” on Ukraine proposed by the Organization for Security and Cooperation in Europe (OSCE).

“Some points in this ‘road map’ of the Swiss Chairmanship [OSCE] needs some clarification, at least, we would like to discuss them, and those consultations continue,” Perebiynis said.

The roadmap proposed earlier by OSCE Chairman and Swiss President Didier Burkhalter provides for concrete steps necessary to de-escalate the crisis in the country, including reducing violence, disarmament as well as facilitating national dialogue and elections. It also stipulates a series of high-level roundtable discussions led by the OSCE aimed to bring all sides of the Ukrainian conflict to the negotiating table.

On Monday, Burkhalter said he also saw no point in holding a Geneva-2 conference on settling the crisis in Ukraine unless “there is necessity to switch to the next stage.”

Russian Foreign Minister Sergei Lavrov confirmed Monday there were currently no plans to resume the four-party talks, forecasting they would not yield any results.

Meanwhile the foreign ministers of the European Union insist on a second meeting at the ministerial level in the Geneva format to settle the situation in Ukraine.

The first round of the Geneva talks took place in April 17 when top diplomats from Russia, Ukraine, the EU and the US agreed on a number of conditions that urged the coup-imposed regime and its opposition in Ukraine to refrain from violence, extremism and provocations, to disarm militants and launch a national dialog on constitutional reform.