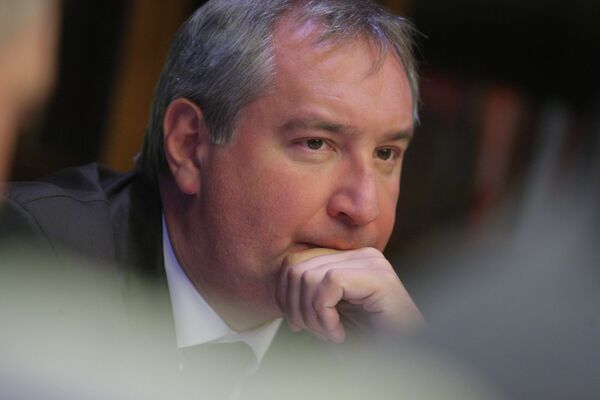 MOSCOW, May 12 (RIA Novosti) – Moscow could reconsider its economic ties with Chisinau if Moldova signs an association agreement with the European Union, Russian Deputy Prime Minister Dmitry Rogozin said in an interview with the Kommersant business daily.

“I will insist on revising economic relations with Moldova if it chooses the association,” Rogozin, who is Russian presidential envoy to Transnistria, Moldova’s breakaway region, told the newspaper.

Moscow’s relations with Chisinau will not remain the same if Moldova seals the association agreement, Rogozin said.

“I am convinced that the association with the EU means changing Moldova’s neutral status. There is a particular rule, all NATO members know this: to join the EU you need to accede to NATO,” he said.

“Now their steps are directed towards Moldova’s withdrawal from ties with Russia and this is unclear to us,” Rogozin said.

Speaking on possible accession of Moldova to the Customs Union of ex-Soviet republics of Russia, Belarus and Kazakhstan, he said Russia would endorse such a decision.

“All the necessary proposals have been made and guarantees have been given. But they have been ignored. We will be glad if Moldova decides to join the Customs Union, and we will do everything to support it. We will do this more disinterestedly that the EU,” Rogozin said.

Rogozin added that Moldova should hold elections to ask the citizens of Transnistria before deciding on the association with the EU.

“If Moldovan politicians were patriots, they would first hold elections, becoming a kind of a referendum as some parties in Moldova favor the association with the EU and others are categorically against,” he said.

Russia does not see a physical threat to Transnistria, a largely Russian-speaking region that borders western Ukraine, but said that the main challenge for Russia is securing civil, economic and political rights of compatriots and Russian citizens there.

On Sunday, Rogozin said he had delivered to Moscow the signatures of citizens of the Moldovan breakaway republic seeking recognition as independent state, adding that the Moldovan special forces took only a small part of the cargo.

The delegation of senior Russian officials, including Rogozin and Russian Culture Minister Vladimir Medinsky, visited Transnistria on May 9. On Saturday, the delegation became stuck in Moldova after Ukraine and Romania closed their airspace for the Moscow-bound plane. The delegation returned to Moscow by a passenger airliner.

Russia’s State Duma lawmaker Sergei Zhigaryov, who was on board the aircraft, said Moldovan authorities seized four boxes with signatures of citizens of Transnistria who said they wished to join Russia.

In 1990, the breakaway republic of Transnistria, with a predominantly Russian and Ukrainian population, declared its independence from Moldova fearing its nationalistic government would take a course towards reintegration with Romania.

This led to armed hostilities in 1992 when Moldova attempted to crack down on the industrially developed Transnistrian region and subsequently lost control of the Dniester’s Left Bank.

Now peace in the region is supported by peacekeeping forces. Tiraspol is seeking international recognition. Moldova proposes autonomy to Transnistria as part of a single state.