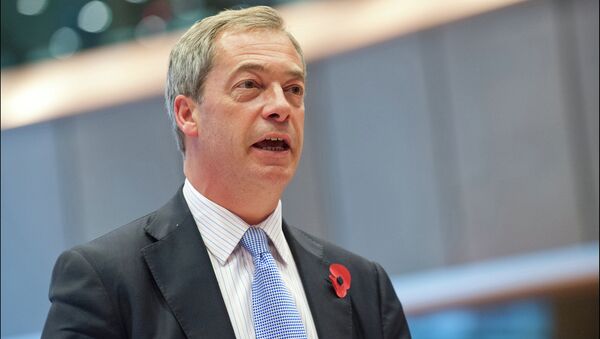 © Flickr / European Parliament
Subscribe
The leader of the United Kingdom Independence Party (Ukip), Nigel Farage MEP, has told RIA Novosti he believes the EU and British Government have “provoked” the crisis in Ukraine.

EDINBURGH, May 10 (RIA Novosti), Mark Hirst – The leader of the United Kingdom Independence Party (Ukip), Nigel Farage MEP, has told RIA Novosti he believes the EU and British Government have “provoked” the crisis in Ukraine.

Farage, who was speaking to a rally of his supporters in Edinburgh told RIA Novosti, “The European Union have actually provoked much of the upset in the Ukraine by offering membership and this is true also of NATO.”

The right wing politician, whose party has no representation in Scotland but has growing popular support in England, added that he believed the British Prime Minister, David Cameron and his Foreign Secretary William Hague had played prominent roles in the Ukraine crisis.

“It’s been incredulous watching this because it seems to me that if you poke the Russian bear with a stick you are bound to get a reaction. I am very sorry for the way things are,” Farage told RIA Novosti.

The Ukip rally in Edinburgh was met by a large crowd of anti-fascist protestors who accuse Ukip of pursuing anti-immigration and racist policies, something Farage rejects.

Ukip currently has 13 elected Members of the European Parliament and 223 local government representatives all of whom represent areas in England. In Scotland they polled just 0.91 percent of the vote at the last election and despite the reference to UK in their party name, they are widely perceived to be an English based party.

Asked what Ukip would do if Scotland backs independence at the referendum to be held on 18 September Farage responded, “Well we would have to change our name, wouldn’t we. We’d have a little problem, wouldn’t we.”

During Farage’s visit to Scotland last year the MEP was forced to seek protection from the police after he clashed with protestors angry at what they perceive as Ukip’s associations with the far right and British fascist groups.

Standing with protestors outside the Ukip rally Colin Fox, leader of the Scottish Socialist Party told RIA Novosti “This is telling Ukip to go home. Ukip’s message is alien to people in Scotland."

Fox added, “This is a social democratic, left of centre country and here comes Nigel Farage, a merchant banker, responsible for the worst crisis this country has seen in 80 years coming here to scapegoat immigrants.”