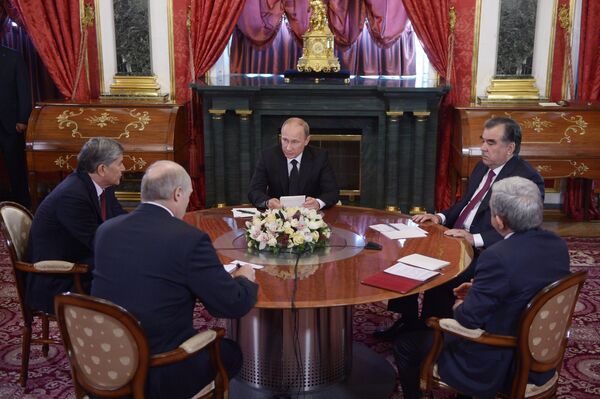 Militant nationalism, which has led to the appearance of Nazi ideology, is raising its head in Europe, Russian President Vladimir Putin said Thursday.

MOSCOW, May 8 (RIA Novosti) – Militant nationalism, which has led to the appearance of Nazi ideology, is raising its head in Europe, Russian President Vladimir Putin said Thursday.

“Here and there militant nationalism is again raising its head, the same kind that brought on the appearance of Nazi ideology,” Putin said during a meeting with the leaders of Armenia, Tajikistan, Kyrgyzstan and Belarus.

On Monday, Putin signed a bill making attempts to “whitewash Nazism” punishable with hefty fines and prison sentences. The law is based on the results of the Nuremberg Trials held by the Allies in 1945-1949, which convicted most surviving Nazi leaders of war crimes, denounced fascism and proclaimed most Nazi organizations as criminal.

The law provides for a monetary penalty of up to 500,000 rubles ($14,000) or a jail term of up to 5 years as punishment for rehabilitating fascism and spreading false information about the Soviet Union’s actions during World War II.

Publicly desecrating symbols of Russian military glory or spreading information disrespecting public holidays related to the country’s defense will be punishable by a fine of up to 300,000 rubles ($8,400) or community service for up to a year.

The Soviet Union’s role in the Allied victory in World War II is an important component of many Russians’ sense of pride and patriotism, with spectacular anniversary parades and ceremonies held each year on May 9.

Pro-federalization supporters have called Ukrainian nationalists, who have protested and fought against federalists in the country's east since the ousting of President Viktor Yanukovych and deadly riots in Kiev, followers of Nazi ideology. Europe has been supporting Ukraine’s so-called Euromaidan activists, who wish to see Ukraine become part of the EU.