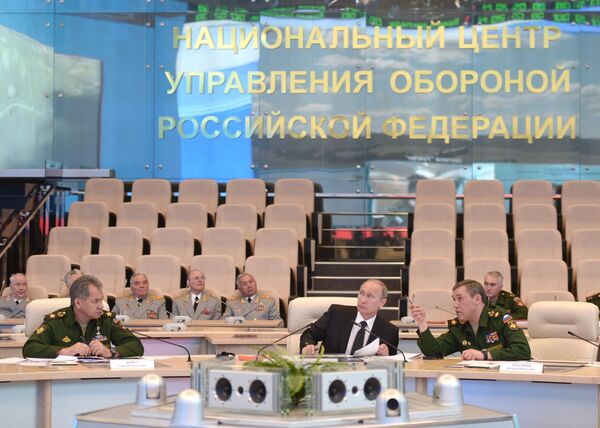 The exercises were attended by the presidents of Belarus, Armenia, Tajikistan and Kyrgyzstan.

"You have all had an opportunity to witness the high level of preparedness and cohesive action by the groups of the country's strategic offensive and defensive forces," Putin told the heads of state.

"I will underline that our army is a secure guarantee of the sovereignty and territorial integrity of our country and plays a substantial role in enforcing global and regional security," he added.

The drill involved strategic bombers, submarine missile carriers of the Pacific and Northern fleets, and a variety of other military hardware.

Speaking a day ahead of the Victory Day holiday, celebrated May 9, Putin also warned the presidents of Collective Security Treaty Organization (CSTO) about the rise of militant nationalism in Europe, which has led to the appearance of Nazi ideology.

The drills also included a test launch of an intercontinental ballistic missile (ICBM), as well as exercise of Moscow’s missile defense system to counter a hypothetical opponent’s ballistic missile attack. The drill also involved maneuvers of formations of the missile troops, artillery, aircraft and air defense systems in simulating the destruction of enemy ground forces and missile and air strikes.

The Soviet Union’s role in the Allied victory in World War II is an important component of many Russians’ sense of pride and patriotism, with spectacular anniversary parades and ceremonies held each year on May 9.