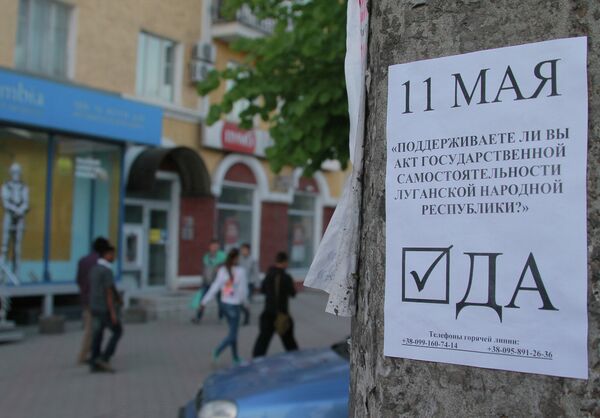 MOSCOW, May 8 (RIA Novosti), Daria Chernyshova – Western politicians will say upcoming referendums in Ukraine are a Russian provocation, proving they do not understand the dynamics of the unfolding protests in the country, Asia Times correspondent Pepe Escobar told RIA Novosti Thursday.

“The ‘international community’ of US, Canada, Japan and a few European politicians will of course say the referendum is illegal and a Russian provocation,” Escobar said. “This proves they simply don't understand the dynamics of the protests.”

On Thursday, the southeastern regions of Luhansk and Donetsk Region announced their decision to go ahead with referendums on self-determination, scheduled for Sunday. The regions have refused to recognize the legitimacy of Ukraine’s interim government.

The West has labeled federalization supporters in eastern and southeastern Ukraine as separatists, while supporting the Kiev authorities.

“People in Eastern Ukraine are not ‘pro-Russians’ but federalists,” Escobar stressed. “They want a united Ukraine – if that would still be possible with neo-fascists involved – and strong autonomous provinces,” he added.

Russian President Vladimir Putin urged pro-federalization activists on Wednesday to put off the referendum to ensure the start of national dialogue to resolve the ongoing crisis in the country.

Ukrainian authorities today said the “anti-terrorist” operation against the restive cities in the country’s south and east would continue despite the vote, with the national security chief claiming that the Donetsk People’s Republic (DPR) does not have the right to hold the referendum.

In April, Kiev’s current authorities launched a special operation to crack down on the protesters, leading to violent clashes in major towns of southeastern Ukraine and dozens of casualties.

“Putin's move asking for the referendum to be postponed was a masterful chess gambit,” Escobar told RIA Novosti. “Moscow does not ‘control’ the protests. Eastern Ukrainians simply won't bow down to the oligarch-neo-fascist-IMF combo now ruling Kiev.”

Moscow insists Kiev continues to grossly violate human rights with the tacit approval of the West. “The condemnation by the high-ranking official from the UN’s Human Rights body, violence and tyranny in Ukraine confirms that the illegitimate Kiev authorities under the cover of their Western patrons are continuing gross violations of conventional legal norms," the Russian Foreign Ministry said in a statement Wednesday.

“Whatever happens will be demonized by the ‘international community’ because rule number one is to demonize anything Putin and Moscow does, does not or is perceived of doing. Inconvenient truths, like the Odessa massacre, are simply ignored,” Escobar concluded.

The US has imposed a third round of sanctions on Russia saying Moscow was responsible for the escalation of tensions in Ukraine after the Geneva agreement. The EU and Japan followed suit.