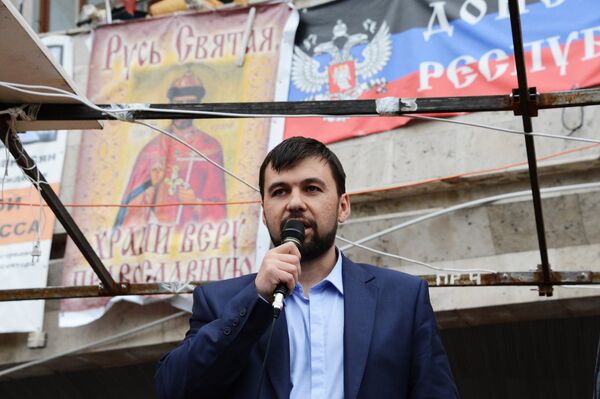 Pro-referendum activists in the Donetsk People’s Republic (DPR) in southeastern Ukraine say they are open for talks with Kiev, but fear the regime will deceive them once again, DPR’s Co-Chairman Denis Pushilin said Thursday.

MOSCOW, May 8 (RIA Novosti) – Pro-referendum activists in the Donetsk People’s Republic (DPR) in southeastern Ukraine say they are open for talks with Kiev, but fear the regime will deceive them once again, DPR’s Co-Chairman Denis Pushilin said Thursday.

“We have never rejected negotiations, we were always there to talk. Unfortunately, Kiev double-crossed us every single time, it didn’t deliver on the accords, its signature has no value, its words are of no value. We strongly doubt that anything will change,” the government co-chairman of the Donetsk People’s Republic said in an interview with the Rossiya 24 channel.

Pushilin maintained that federalists were ready to consider the regime’s proposals. “Our main [concern] is the end of bloodshed. It’s enough. The situation is going to exacerbate without a dialog. We know it very well that when diplomats talk, cannons are silent. It’s the other way round now,” he said.

On Wednesday, Russia’s President Vladimir Putin urged pro-federalization activists in southeastern Ukraine to postpone a referendum on greater autonomy to ensure the start of nationwide dialogue.

“We are calling on representatives of regions in southeastern Ukraine, supporters of federalization in the country, to postpone the referendum set for May 11 in order to create all necessary conditions for this dialogue," Putin said at a joint news conference with OSCE Chairman Didier Burkhalter in Moscow.

Denis Pushilin said Putin’s proposal would be discussed at a meeting of the people’s assembly on Thursday, since DPR authorities had the “utmost respect for President Putin’s position.”

Citizens of the mainly Russian-speaking southeastern regions of Ukraine have refused to recognize the legitimacy of the country’s interim government and have announced referendums on self-determination in Donetsk and Luhansk regions, to be held on May 11.

Kiev’s current authorities have launched a special operation to crack down on the protesters, leading to violent clashes in major towns of southeastern Ukraine and dozens of casualties. Last Friday, 46 protesters were killed and over 200 were injured in the port city of Odessa.