Belarusian President Offers to Coordinate on Ukraine With Moscow 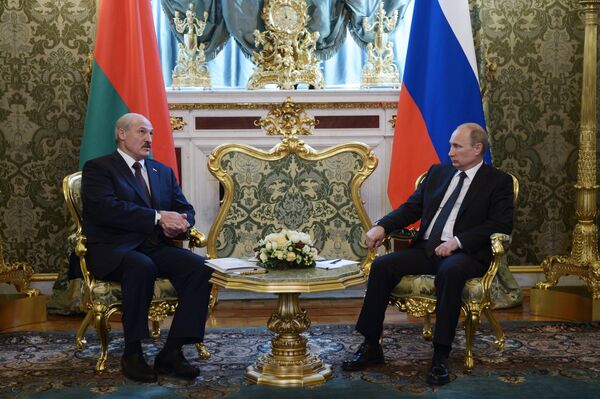 Belarusian President Alexander Lukashenko suggested to Russian President Vladimir Putin on Thursday that the two countries could coordinate joint activities in regard to the situation in Ukraine.

MOSCOW, May 8 (RIA Novosti) – Belarusian President Alexander Lukashenko suggested to Russian President Vladimir Putin on Thursday that the two countries could coordinate joint activities in regard to the situation in Ukraine.

“I would like, as one would say, behind the scenes, to openly talk about the situation in Ukraine and somehow coordinate our actions. Because this crisis will probably not end tomorrow and it has a direct influence on you and on us,” Lukashenko said during a meeting with Putin in Moscow.

Belarus became one the first countries to acknowledge Russia’s reunification with Crimea, a former republic within Ukraine, where 96 percent of voters supported integration with the Russian Federation in a March referendum.

Lukashenko also condemned recent military actions of Kiev’s current authorities, which led to dozens of people dying in clashes starting in late April. The highest death toll was registered on May 2 in the Ukraine’s southern port city of Odessa, where 46 people were killed and 214 injured in a fire at the Trade Unions House.

Pro-federalization rallies swept across Ukraine’s mainly Russian-speaking regions after local residents refused to recognize Kiev’s interim government. Russia has called the Western-backed military operation against protesters a “punitive act” and accused Ukraine’s authorities of waging a war against their own people.