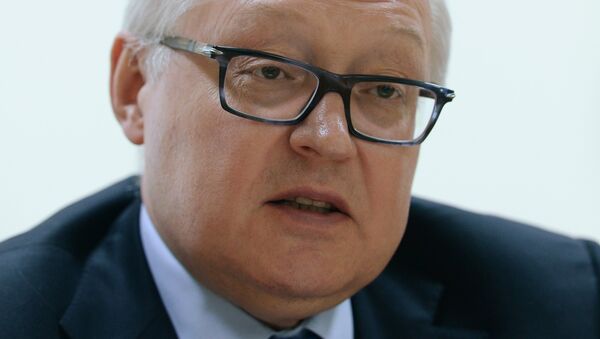 © RIA Novosti . Valeriy Melnikov
/
Go to the photo bank
Subscribe
Russia and the United States continue to fulfill their nuclear disarmament obligations under the 2010 New START Treaty despite the chill in bilateral relations caused by the political crisis in Ukraine, a Russian deputy foreign minister told RIA Novosti Tuesday.

MOSCOW, May 6 (RIA Novosti) - Russia and the United States continue to fulfill their nuclear disarmament obligations under the 2010 New START Treaty despite the chill in bilateral relations caused by the political crisis in Ukraine, a Russian deputy foreign minister told RIA Novosti Tuesday.

“Both sides are implementing the 2010 START Treaty thoroughly and responsibly,” Sergei Ryabkov told RIA Novosti in an interview. “For now, there are no indications that the treaty will not be fully implemented [by the end of agreed seven-year duration period].”

“We are not linking the implementation of the treaty to the events in Ukraine,” the diplomat added.

The New START Treaty, providing for a further reduction of the US and Russian nuclear arsenals, was signed by US President Barack Obama and former Russian President Dmitry Medvedev in April 2010 and was held up by both sides as the centerpiece of their vaunted campaign to “reset” rocky relations between the two countries.

Since the New START nuclear disarmament treaty entered into force in February 2011, the United States and Russia have exchanged over 5,500 treaty notifications providing the two sides daily updates on the status of their nuclear forces.

The senior diplomat that Russia has never linked its New START Treaty obligations to the events in Ukraine, where the protracted political crisis and a state coup has triggered the most serious geopolitical showdown between Russia and the West since the end of the Cold War.

Ryabkov said that the treaty was “fundamentally linked” to the two states’ strategic offensive and defensive potential and its review by Moscow was possible if Russia feels threatened by the US plans to build a missile shield in Europe.

“Missile shield developments may, in the final analysis, to have a negative impact on perspectives for implementing the treaty,” the official said.

He said that numerous signs reveal that the US has recently intensified its work on the missile shield.

There are indications that the United States has intensified work on various elements of its missile defense network aimed at undermining Russia’s nuclear deterrent, Ryabkov said.

“This confirms our initial fears that the missile shield in its final version is intended not only to stave off limited threats, as it had previously been declared,” Ryabkov said in an interview with RIA Novosti.

“To a great extent, it will be formed, designed and built to try to somehow neutralize Russia’s strategic nuclear deterrent potential,” Ryabkov said.

“We realize that in light with Washington’s hard stance on many aspects of the [missile defense] dialogue and bilateral relations in general, we should not expect any progress,” the diplomat said.

Late last month, the US Navy has deployed for the first time an advanced version of a missile-interceptor for its Aegis missile defense system, initiating the second phase of Washington’s plan to boost missile defenses in Europe.

The US missile defense system in Europe, which NATO and the US say is aimed at countering threats from North Korea and Iran, has been a particular source of friction in US-Russian relations for a number of years.

Russia and NATO formally agreed to cooperate over the European missile defense system at the 2010 NATO summit in Lisbon, but talks foundered, in part over Russian demands for legal guarantees that the system would not target its strategic nuclear deterrent.