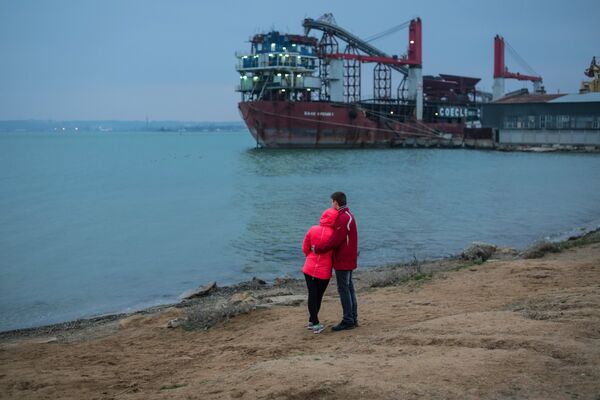 Chinese companies may participate in the construction of a transportation corridor to Crimea via the Black Sea’s Kerch Strait, the Russian Kommersant newspaper reported Monday.

MOSCOW, May 5 (RIA Novosti) – Chinese companies may participate in the construction of a transportation corridor to Crimea via the Black Sea’s Kerch Strait, the Russian Kommersant newspaper reported Monday.

According to the report, state contractor China Railway Construction Corporation (CRCC) and the private investment fund China International Fund Ltd. (CIF) are planning to take part in the $3 million project.

The Russian Ministry of Transportation is currently preparing a memorandum on the construction, and an agreement could be signed during Russian President Vladimir Putin’s visit to China later this month.

An engineering model of the project has not yet been approved. Plans call for either a bridge to carry rail and road traffic, or for part of the route to pass through a subterranean tunnel.

Plans are expected to be finalized by the end of the month, while the financial and construction models are due in July. According to sources cited by Kommersant, cooperation with Chinese companies does not mean that Russian contractors will not be involved in the project – all leading infrastructure construction companies have expressed their interest in the transport corridor. Different outsourcing processes are being considered – from a tender to handing off the project directly to a group of companies.

By November 1, engineering surveys are planned to be completed as well as technical and economic assessments. The total project cost is estimated at 45.4 billion rubles ($1.27 billion).

China International Fund is a private investor specializing on financing infrastructure projects. It is well known for major projects in Angola and Guinea. The state-owned CRCC is one of the world’s largest construction companies, with experience in building railways, highways, bridges and tunnels. Apart from China, the company also operates in Libya and Saudi Arabia.

Crimea, previously an autonomous republic within Ukraine, refused to recognize the legitimacy of the government in Kiev which seized power as a result of a coup in February, instead rejoining Russia following a referendum on the issue.