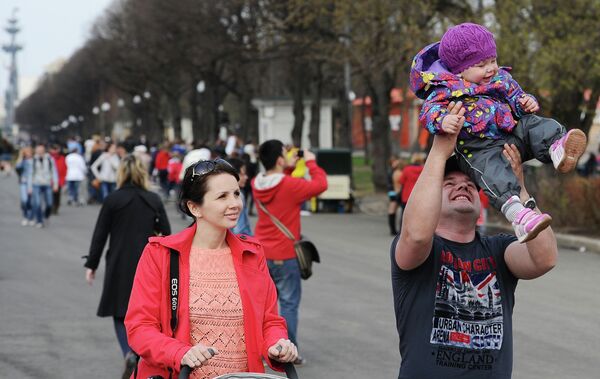 © RIA Novosti . Maksim Blinov
/
Go to the photo bank
Subscribe
A third of Russians who took part in a recent Happiness Index survey said they were the happiest they had been in 25 years.

MOSCOW, April 30 (RIA Novosti) – A third of Russians who took part in a recent Happiness Index survey said they were the happiest they had been in 25 years.

Some 78 percent of respondents told pollsters from the VTsIOM public opinion research center they were content about their lives, the highest figure in 25 years.

Young people in the 18-25 age bracket appear to be the happiest, the study revealed. They made up 92 percent of happy respondents.

The index has climbed one percent since last year. According to researchers, the happiness level among Russians remained above a record 77 percent for two years running.

One in three respondents said happiness for them was linked with their family life, their children and grandchildren, as well as an interesting job and education, while the number of those who though it was good just to be alive has doubled, pollsters said.

They added that the unhappy ones among Russians complained about a low standard of life and bad health.

The Happiness Index was derived from the total number of those who said they were “definitely happy” and “quite happy” as opposed to “rather unhappy” and “definitely unhappy” people. It is calculated in the range of -100 to 100.

The survey was conducted among 1,600 respondents across 45 Russian regions.