Kiev Hopes to Discuss Release of OSCE Inspectors With Moscow 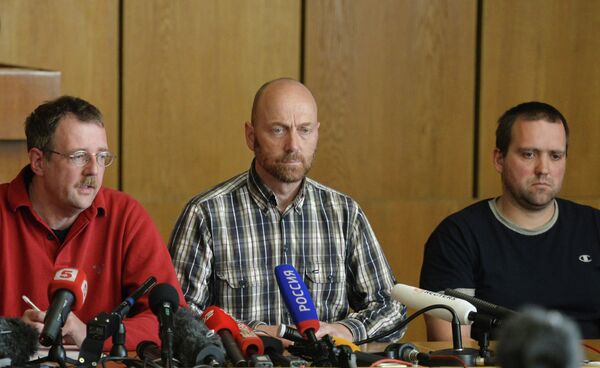 “I submitted a request for a telephone talk with the Russian foreign minister and we hope that all these efforts will result in the release of the hostages,” Deshchytsia said during a press briefing Wednesday.

Late last week, activists in Slaviansk detained on suspicion of espionage 11 members of a military mission under the auspices of the Organization for Security and Cooperation in Europe (OSCE), including eight Europeans and three Ukrainians.

Deshchytsia said that the Ukrainian Foreign Ministry was in close contact with officials from the home countries of the citizens being held by self-defense forces in Slaviansk, in particular Germany, Poland and Denmark.

“We also conduct regular consultations with the OSCE Monitoring Mission,” the acting minister said, adding that the head of the mission is currently in Donetsk for meetings with regional authorities to assess the situation.

Russian President Vladimir Putin expressed hope Tuesday that the inspectors would soon be free to leave.

“I hope that this conflict will be resolved and they [the observers] will be able to leave … but all involved in this process should draw conclusions from this situation and analyze it thoroughly,” Putin told reporters after a summit of the Supreme Eurasian Economic Council in Belarus.

He also stressed that the Ukrainian authorities should have discussed the visit of OSCE observers with pro-federalization activists who do not recognize the Kiev regime and control the area.