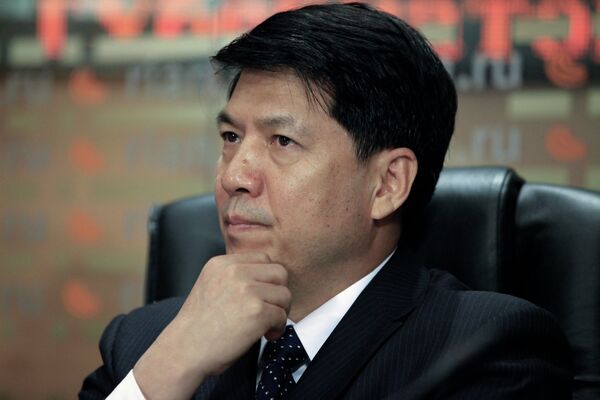 China strongly opposes unilateral sanctions against Russia, Beijing's ambassador to Moscow told reporters Wednesday, adding that US and EU sanctions would not resolve the crisis in Ukraine.

“We are against imposing unilateral sanctions on Russia. They are not a way out,” Chinese Ambassador Li Hui said.

The remarks followed Washington’s announcement on Monday that it had added seven high-ranking Russian officials and 17 Russian companies to a blacklist of sanctioned persons.

On Tuesday, the European Union agreed to fall in line with Washington and added another 15 Russian and Ukrainian individuals to its sanctions list. Among those targeted are Russia’s military chief of staff, Gen. Valery Gerasimov, and intelligence chief Igor Sergun, as well as six pro-federalization activists from Ukraine’s southeastern regions.

Li’s comments echoed a statement by Chinese Foreign Minister Qin Gang earlier this week that “imposing sanctions is not helpful in terms of solving the problem. It will only exacerbate tensions.”

The Chinese minister called on all parties to continue dialog and promote a political solution. “Imposing sanctions goes against the interests of all parties," he said.

At the same time, Li lauded the continued growth of Russian-Chinese bilateral cooperation, adding there was a marked rise in trade turnover in recent years.

Beijing has been cementing its business ties with Moscow amid strained relations between Russia and the EU. Russian President Vladimir Putin is expected to visit China in May to sign a number of bilateral agreements, including on potential Russian gas supplies to China.