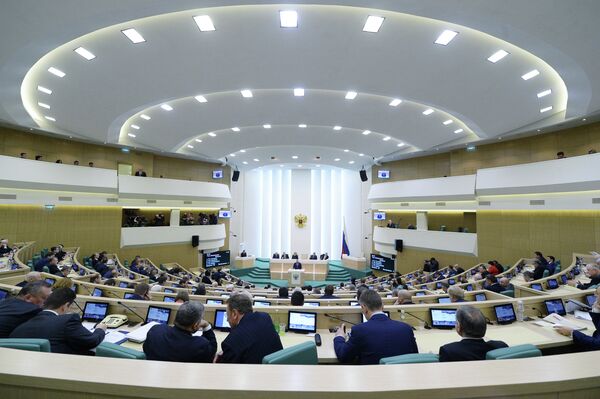 Russia’s upper house of parliament, the Federation Council, approved a bill Tuesday introducing criminal punishment of up to five years in jail for the rehabilitation of Nazism.

MOSCOW, April 29 (RIA Novosti) – Russia’s upper house of parliament, the Federation Council, approved a bill Tuesday introducing criminal punishment of up to five years in jail for the rehabilitation of Nazism.

The legislation criminalizes the denial of facts set out by the post-war Nuremberg trials and the dissemination of false information on the actions of the Soviet Union during the war. It also introduces fines for desecrating war monuments.

The bill was backed by a total of 130 Russian senators and opposed by just one, while two senators abstained from the vote.

If a state official commits that offense, he or she would be sent to prison for up to five years or face a fine of up to 500,000 rubles ($14,000) and be barred from government posts for up to three years.

Publicly desecrating symbols of Russian military glory or spreading information disrespecting public holidays related to the country’s defense will be punishable by a fine of up to 300,000 rubles ($8,400) or community service for up to a year.

The authors of the bill say that national legislation in Austria, Germany, Belgium and France envisage criminal punishment for public denial, approval or justifying Nazi crimes during WWII as well as crimes against humanity set out by the Nuremberg Tribunal verdict.

Russian lawmakers have long criticized the “glorification of Nazism” in some post-Soviet republics, such as Ukraine and the Baltic states, which had resilient insurgencies that alternatively cooperated with and opposed both the Soviets and the Nazis during the war.

Many modern radical nationalists in these countries see the leaders of the war-era resistance as national heroes, despite their cooperation with the Nazis and, in some cases, involvement in genocide.