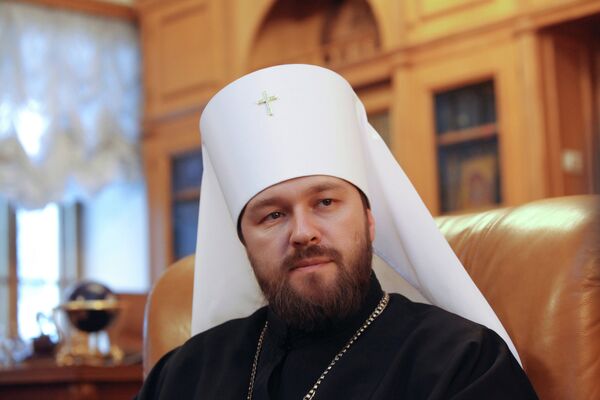 © RIA Novosti . Vladimir Fedorenko
/
Go to the mediabank
Subscribe
International
India
Africa
Russia remains the only consistent advocate of Christians in the Middle East, where "Christian communities are being exposed to genuine genocide," Metropolitan Hilarion of Volokolamsk said in an interview with RIA Novosti Tuesday.

MOSCOW, April 29 (RIA Novosti) – Russia remains the only consistent advocate of Christians in the Middle East, where "Christian communities are being exposed to genuine genocide," Metropolitan Hilarion of Volokolamsk said in an interview with RIA Novosti Tuesday.

"Western countries, which were helping Christians in the region for centuries, have denied them support and almost officially recommended them to leave the region and move to other countries,” said Hilarion, who oversees the Russian Orthodox Church's external relations.

“I was told this by, for example, Maronites [members of one of the Syriac Eastern Catholic Churches] who have been living in Syria and Lebanon for centuries. They were disappointed by France, which had been traditionally supporting them but is refusing to defend them now. Our country has remained the sole defender of the Christian presence in the region. Many Christians remaining in flashpoints are relying on [Russia],” he said.

Christians are currently facing unprecedented persecution in the Middle East, he stressed.

“Christian communities in some countries are being exposed to genuine genocide” because of the spread of terrorism and extremism on religious grounds, Metropolitan Hilarion said.

“[The Russian Orthodox Church] on a regular basis receives reports on the destruction and desecration of Christian churches, kidnapping of clerics, beheading of Christians, mass graves of killed Christians being found, exiles of Christian families from their homes …, shelling of Christian residential areas," he said.

Extremists aim to completely expel Christians from their places of residence by means of terror or physical destruction, the representative of the Russian Orthodox Church said.

Developed countries have to use political instruments for resolve this crisis, Hilarion added.

Three years have passed since the European Parliament signed a resolution titled the “Situation of Christians in the Context of Freedom of Religion,” but a mechanism for monitoring compliance of freedom of conscience in the world was not created, the Hilarion said.

“International institutions do not react to violations of rights of the Syrian civil population, including Christians. I would even say that actions and statements of representatives of some Western powers rather contribute to further polarization of society," Metropolitan Hilarion said.

He urged all political forces to “approach what is happening in Syria with responsibility” and base their actions on the interests of the Syrian people.