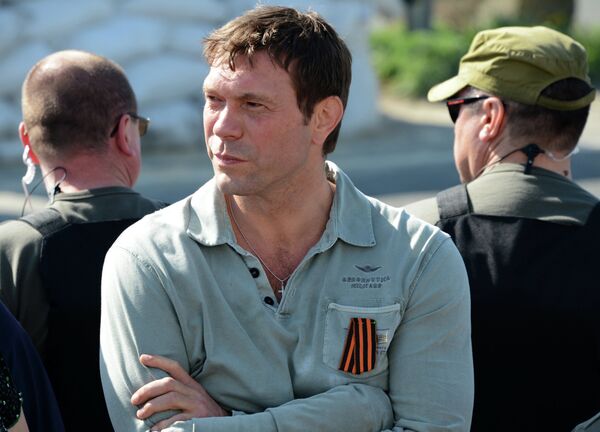 © RIA Novosti . Natalia Seliverstova
/
Go to the mediabank
Subscribe
International
India
Africa
Oleh Tsarev, a Ukrainian presidential candidate and an active pro-federalization supporter, announced Tuesday he is withdrawing from the upcoming May 25 presidential election in the country.

MOSCOW, April 29 (RIA Novosti) – Oleh Tsarev, a Ukrainian presidential candidate and an active pro-federalization supporter, announced Tuesday he is withdrawing from the upcoming May 25 presidential election in the country.

“I made a decision to withdraw from the election as I think the status of a candidate is not efficient under the current conditions. We will search for other information sources and ways to get our thoughts and messages across to the citizens of Central and Western Ukraine,” a statement on his Facebook page reads.

His press secretary Svetlana Kolesnikova told RIA Novosti that she could not yet confirm the information.

Tsarev also urged all other candidates to follow his example and boycott the upcoming election.

Tsarev was brutally beaten by radicals in Kiev following his appearance on the Ukrainian talk show “Svoboda Slova” (“Freedom of Speech”) earlier this month.

Konstantin Dolgov, the Russian Foreign Ministry's Commissioner for Human Rights, Democracy and the Rule of Law, condemned the attack as violating a free and democratic election and also criticized the West’s “shy silence” towards the reports.

Tsarev, a former People's Deputy of Ukraine for the Party of Regions, has chaired the Anti-Fascist Forum of Ukraine since 2011. He formerly served as an adviser to Ukrainian Prime Minister Mykola Azarov, who was ousted in February as a result of a coup.

At least two dozen candidates have announced their intention to run in the upcoming race.