US, Europe Divided Over Anti-Russia Sanctions 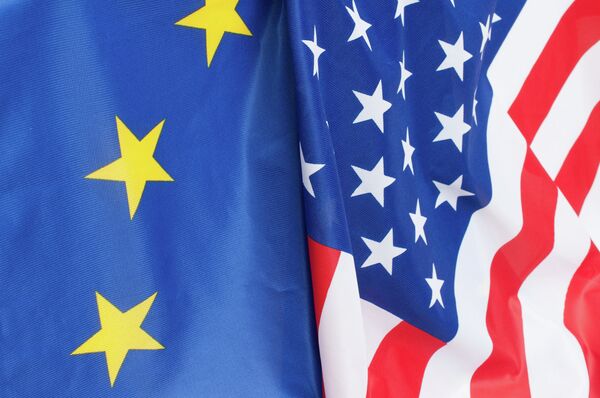 As the United States seeks to slap tougher economic sanctions on Russia, it has found itself mired in a debate with the wary European Union on how to show Russia a united front, the New York Times reported Monday.

WASHINGTON, April 28 (RIA Novosti) – As the United States seeks to slap tougher economic sanctions on Russia, it has found itself mired in a debate with the wary European Union on how to show Russia a united front, the New York Times reported Monday.

The issue of a coordinated effort came to a head last week when the EU, who has more at stake economically, reared against the US sanctions plan on Friday, forcing Washington to put it off until Monday.

Brussels fears that more economic sanctions, used by the US to try and drive a wedge in the Russian economy, will hit the EU much harder than the US. In 2012, the trade turnover between Russia and Europe amounted to 370 billion dollars, compared to only 26 billion between the US and Russia.

US President Obama has been reluctant to get too far ahead of European partners in his drive for more pressure on Russia, unlike some officials who said that waiting on Europe was a recipe for inaction.

“The notion that for us to go forward with sectoral sanctions on our own without the Europeans would be the most effective deterrent to Mr. Putin, I think, is factually wrong,” Mr. Obama said at a press conference during his Asia trip.

“We’re going to be in a stronger position to deter Mr. Putin when he sees that the world is unified,” he added.

Obama was backed in his cautious approach by US Treasury Secretary Jacob Lew who called for a more balanced sanctions plan, saying that more action on the part of America without sufficient EU backing meant the US interests would be hurt without having the desired impact on Moscow.

The newest round of sanctions may put blocks on four of Russia’s biggest commercial banks, as well as on executive directors of its two energy giants, the gas major Gasprom and the oil-trading Rosneft.

Moscow has repeatedly criticized Washington for using the “language of sanctions” against Russia, saying the move was counterproductive and mutually destructive.