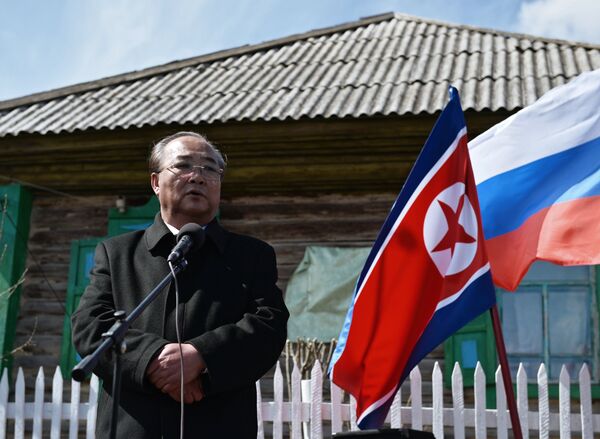 Speaking on possible retaliatory measures towards the ongoing joint exercises by South Korea and the United States in the region, the ambassador said the situation for North Korea was rather tense.

“It is notable that America is located several thousand kilometers from this country across the ocean. They have come to us, to the Korean Peninsula, they conduct military maneuvers in every convenient case each year. When our Army conducts its regular military drills they call it a provocation and a threat against South Korea,” Jae said.

The ambassador said North Korea urges Washington not to conduct any military drills near the republic’s borders which “indeed pose a serious military threat, the threat of a nuclear war.”

“If they want, let them carry out [drills] near their coasts, and take all the nuclear weapons from the Korean Peninsula with them,” he said.

According to Jae, the Americans do not conceal that military drills are aimed directly at “toppling our system.” During the recent military drills, “an amphibious operation imitating the seizure of Pyongyang” was conducted, he said.

“We also have our own ‘red line’ and let them not cross this line. Some countries demand that we keep calm and remain patient, but such a demand should be made to Americans so that they do not provoke us,” the diplomat said.

Earlier this month, North Korea accused Washington of heightening tensions on the Korean Peninsula. Pyongyang said it was drawing a "red line," warning Washington not to cross it in its bid for "regime change" in the country.

Last week, South Korean news agencies said Pyongyang seemed to be gearing up for a fourth nuclear test, citing a significant increase in activity at North Korea's Punggye-ri facility in the northeast of the country.