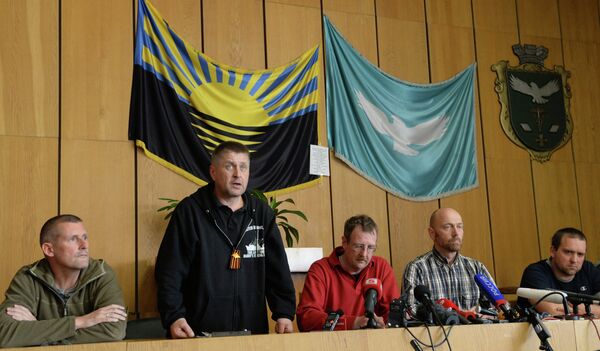 Military observers from the Organization for Security and Cooperation in Europe being held as prisoners of war in eastern Ukraine’s Slaviansk could be freed in exchange for the release of federalization supporters taken hostage by Kiev, the city’s people’s mayor said Monday.

SLAVIANSK, April 28 (RIA Novosti) – Military observers from the Organization for Security and Cooperation in Europe being held as prisoners of war in eastern Ukraine’s Slaviansk could be freed in exchange for the release of federalization supporters taken hostage by Kiev, the city’s people’s mayor said Monday.

“In particular, we demand the release of my deputy Ihor Perepechayenko,” Vyacheslav Ponomaryov said. “To put it crudely, he was kidnapped and now his whereabouts are unknown,” he added.

Ponomaryov said last week his ally Perepechayenko was detained by the Ukrainian Security Service at an airport in the city of Donetsk as he was returning from Moscow, where he had taken part in a political talk show at a Russian TV channel.

“A range of our supporters, our friends are being held by the junta. If we have such a chance, we are ready for the swap,” Ponomaryov said.

Last week, federalization supporters stopped a bus carrying OSCE monitors at a checkpoint and found that the observers were accompanied by Ukrainian officers, Ponomarev said. The activists detained 11 members of the military mission, eight Europeans and three Ukrainians among them, who are suspected of “espionage,” Ponomaryov said. The driver of the OSCE bus, a citizen of Ukraine, has been released.

After talks on Sunday, the self-defense forces agreed to release one of the OSCE team’s members, a Swedish military officer named Ingvi Thomas Johanson. A source in the self-defense forces said Johanson was freed as “he had health problems and Sweden is not a NATO member state, and also as a show of good intentions and negotiability.”

The OSCE said in a statement on its website that Johanson is diabetic.

The OSCE Special Monitoring Mission to Ukraine was deployed by a request of Ukraine’s government and a consensus agreement by all 57 OSCE member countries. “The monitors are to contribute to reducing tensions and fostering peace, stability and security,” the OSCE said.

Ukraine’s presidential candidate Oleh Tsarev, who is mediating the talks, demanded the organization pressure Kiev to release federalization supporters. He said under the Geneva deal, conflicting sides are to release those detained at protest rallies and grant amnesty to political prisoners.

Eastern Ukraine has been hit by pro-federalization protests in mainly Russian-speaking regions. The Ukrainian government earlier announced a special operation to crack down on the unrest.