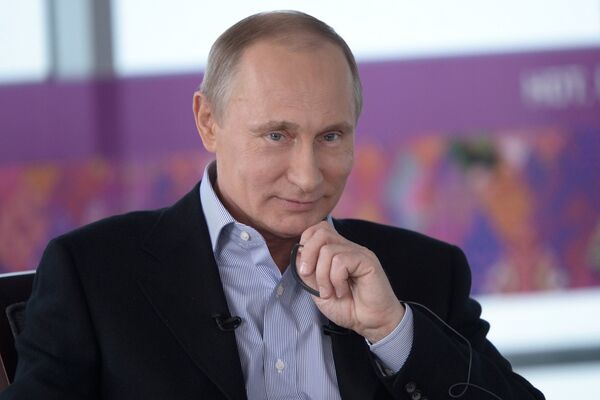 Russian President Vladimir Putin has rallied the peoples of Russia behind a project of re-building the country’s economy and national prestige, UK Member of Parliament George Galloway has told RIA Novosti.

“Vladimir Putin is the most impressive leader in the world today,” Galloway said. “He has rallied the peoples of the Russian Federation behind a project of national re-building of the economy, the dignity and the prestige once universally recognized and often admired.”

In an interview in the forthcoming issue of GQ magazine, Scotland's First Minister Alex Salmond revealed admiration for “certain aspects” of President Vladimir Putin and praised the way Russia’s national pride has been restored.

“He’s restored a substantial part of Russian pride and that must be a good thing,” Salmond said. “There are aspects of Russian constitutionality and the inter-mesh with business and politics that are obviously difficult to admire,” he added.

“After the national disaster of the Yeltsin era, when Russia's national wealth was looted and often shipped abroad and an oligarchy and mafia-driven state disintegration was gathering pace, Putin has stopped this in its tracks and begun to reverse it,” George Galloway told RIA Novosti.

“I don't approve of a range of Russian actions, but I think Putin's more effective than the press he gets, I would have thought, and you can see why he carries support in Russia,” Salmond said.

Galloway noted that much remains still to be done in Russia, though it “was and is again a great power in the world.”

“It has ended the unipolar period when the US, a giant with the mind of a child, did exactly as it pleased and returned a potential equilibrium to world affairs. President Putin has been the key to these changes,” Galloway said.

Salmond made his remarks on March 14, prior to the public referendum in Crimea which saw 96 percent of the people voting to rejoin Russia.

Putin’s approval ratings have been at all-time highs since then, reaching 80 percent at the end of last month, according to the pollster Levada Center. The majority of Russians said the country was heading in the right direction.