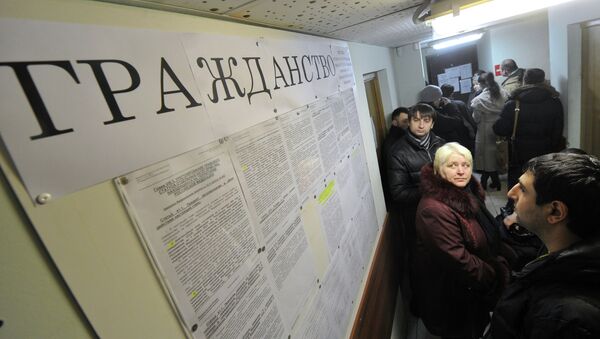 The Russian Federal Migration Service (FMS) is preparing a bill to ease the integration of forced migrants into society while preventing the abuse of the right to seek asylum.

MOSCOW, April 25 (RIA Novosti) – The Russian Federal Migration Service (FMS) is preparing a bill to ease the integration of forced migrants into society while preventing the abuse of the right to seek asylum.

In a summary of the bill posted on Russia’s database of legal initiatives, the watchdog said it intended to create “favorable conditions for social, economic and cultural integration of forced migrants,” but, at the same time “prevent abuses by foreigners and stateless persons … of their right to seek asylum.”

The summary mentioned no specific provisions. If passed, the bill would come into force between 2015 and 2016.

Citizens of Ukraine, hit by a protracted political crisis, have become the largest group of asylum seekers in Russia in recent weeks.

The Federal Migration Service said last month it had noted a sharp spike in applications for Russian citizenship from Ukrainian citizens residing in the country.

In February alone, migration from Ukraine to the nearby Rostov region increased by 53 percent, while exodus to the Kursk region rose by 71 percent, showing signs of a looming “humanitarian catastrophe,” according to the border guard service.

In February, the Ukrainian parliament backed by far-right movements ousted from power President Viktor Yanukovych, amended the constitution and scheduled an early presidential election for May 25.

The Ukrainian government, which rose to power with the backing of ultranationalist and neo-Nazi groups, has taken a number of measures directed against the country’s Russian speakers, including the repeal of a law making Russian the second official language in regions with a substantial Russian-speaking minority.