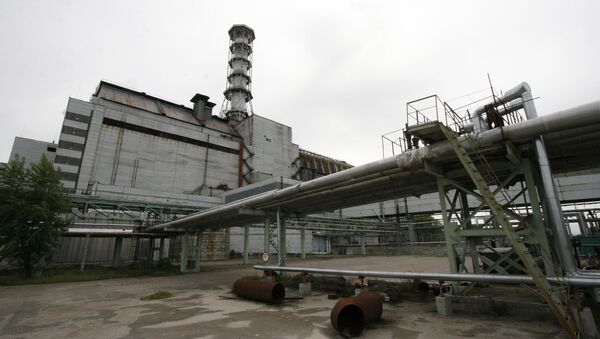 © Sputnik / Sergey Starostenko
/
Go to the photo bank
Subscribe
As EBRD does not finance the final decommissioning at Chernobyl, the Chernobyl NPP will use state budget funding to complete the project, Vince Novak, EBRD Director for Nuclear Safety told RIA Novosti in an interview ahead of the 28th anniversary of the disaster.

MOSCOW, April 25 (RIA Novosti), Nikita Alentyev – As EBRD does not finance the final decommissioning at Chernobyl, the Chernobyl NPP will use state budget funding to complete the project, Vince Novak, EBRD Director for Nuclear Safety told RIA Novosti in an interview ahead of the 28th anniversary of the disaster.

“EBRD managed funds do not finance decommissioning of Chernobyl Units 1-3. Nuclear Safety Account finances two decommissioning infrastructure projects: The Liquid Waste Treatment Facility is complete and is currently in the final stage of “active” testing. The spent fuel storage facility is in progress.  These facilities will support decommissioning carried out by Chernobyl NPP with funding from the state budget,” he said explaining the breakdown of responsibility for the final decommissioning.

Novak also talked about the current progress on the New Safe Confinement currently erected in Chernobyl.

“Construction of the New Safe Confinement (NSC) is progressing well. The first half of the arch has been completed and slid to the temporary position earlier this month while the second half is being assembled,” he stated.

Novak added that “the complete installation and testing of cranes and other equipment before the NSC is slid over the old Shelter” is scheduled for early 2017, with the Shelter license expiring in 2023.

Vince Novak resolved the concerns voiced over time about the leaking fuel mass inside the unit at Chernobyl.

“NSC is equipped with cranes and other facilities required to carry out gradual deconstruction of the Shelter and waste management operations in accordance with the strategy for handling fuel containing materials over a long period. The design life of the NSC is one hundred years,” he said.

He stated that a large-scale project like this is a costly endeavor, but the sponsoring stakeholders are determined to follow through.

“Completion of the NSC will require significant additional funding from donor governments. EBRD shareholders have in the past responded to the donors’ requests to assist in the funding of the Chernobyl programme and remain fully committed,” Novak explained, adding that the final costs of decommissioning are difficult to assess, as “they largely depend on specific site circumstances and labour costs which are a key element of the overall decommissioning cost.”

April 26 marks the 28th anniversary of one of the worst man-made disasters in history, the Chernobyl nuclear accident, when one of the four nuclear reactors exploded. The catastrophe affected the lives of millions of people. Vast areas estimated at 50 thousand square kilometers, mainly in the three then-Soviet republics of Ukraine, Belarus and Russia were contaminated by the fallout from the critical nuclear meltdown. Some 200,000 people were relocated after the accident.