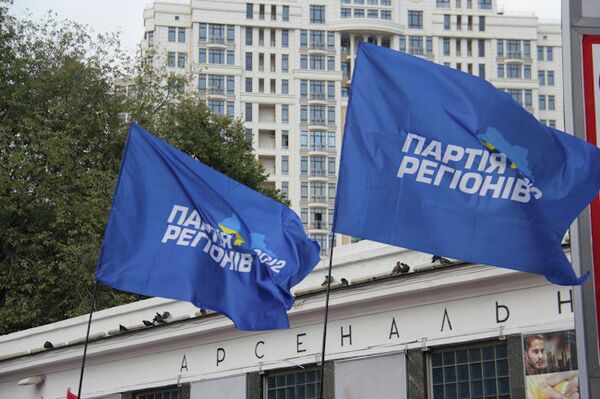 © RIA Novosti . Sergei Tyshkovets
Subscribe
The armed conflict in Ukraine’s southeastern town of Slaviansk needs to be de-escalated peacefully, as opposed to continuing the “anti-terrorist” operation, the deputy chief of the Party of Regions said Thursday.

KIEV, April 24 (RIA Novosti) – The armed conflict in Ukraine’s southeastern town of Slaviansk needs to be de-escalated peacefully, as opposed to continuing the “anti-terrorist” operation, the deputy chief of the Party of Regions said Thursday.

“We believe that only peaceful methods must be allowed. We are against further escalation of the conflict,” Mykhailo Chechetov told RIA Novosti, adding a bad peace was better than a good war.

Ukraine’s Interior Ministry said earlier today its commandos, backed by armored vehicles, had wiped out three roadblocks in Slaviansk and killed three protesters. Activists with the pro-referendum movement said they had lost two fighters. Russian President Vladimir Putin has accused the Ukrainian regime of crimes against its own citizens.

Chechetov blasted the government in Kiev for misrepresenting the Geneva accords of agreed to last week. “They spin the Geneva agreements so that the provisions to clear administration buildings and disarm would only refer to the southeast and lead to further de-escalation,” he said. “Steps should be taken simultaneously in Kiev and in the east.”

The Security Service of Ukraine announced Wednesday that a military operation launched by Ukrainian authorities earlier this month against protesters in eastern Ukraine had again entered an active phase, following a temporary suspension after an agreement reached in Geneva last week.

Protesters in Kharkiv, Donetsk, Gorlovka, Slaviansk and Kramatorsk refuse to recognize the legitimacy of the current Ukrainian government and are urging interim authorities to hold referendums similar to the one held in Crimea last month, which led to the republic’s reunification with Russia.